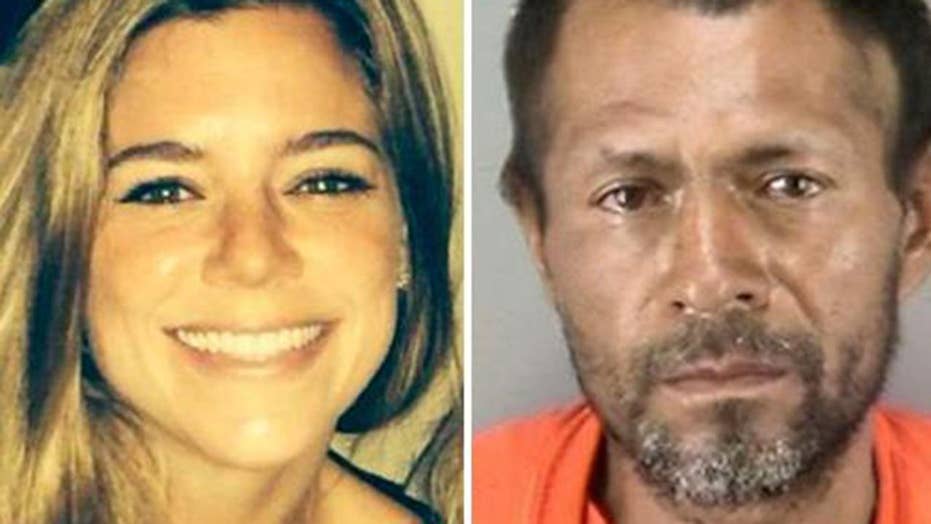 The second day in the trial of the homeless illegal immigrant from Mexico charged with killing Kate Steinle featured testimony from a witness to the slaying.

Michelle Lo took the stand Tuesday to tell the jury, with the help of an interpreter, what she saw the night of July 1, 2015, when Steinle was fatally shot in San Francisco.

Lo said she was on vacation in San Francisco with her family at the time. She remembered a man dressed in black who "looked like a homeless person" and was spinning around in a chair "grinning and laughing" who made her uncomfortable.

She said she and her family continued along a pier before hearing a "very sharp scream" and seeing a woman on the ground. And she said she saw the same man from earlier walking away.

Lo had taken photos on the pier before the shooting occurred and both Steinle and the defendant, Jose Ines Garcia Zarate, appeared in them. One showed Zarate sitting in one of the aformentioned chairs and another showed Steinle walking near him.

During the defense's cross examination, attorney Matt Gonzalez questioned Lo based off her initial police interview at the time of the shooting, during which she said she didn't really notice Zarate.

Jose Zarate admits to fatal shooting, but claims it was accidental.

After Lo repeatedly said she didn't remember certain details, Gonzalez read portions of her interview transcript. She confirmed to the jury that at the time of the interview she said, "I didn't pay too much attention to him" and "looked because [I] was passing by but not intentional."

She also confirmed that Zarate's presence in her photos was coincidental.

Following Lo, the jury heard from two other witnesses, Maria Moreno and Aryn Carpenter, who were staying at a hotel near the pier at the time of the shooting.

The pair said they could hear "screams like you'd hear in a horror film" and saw a large group of people hovering around what appeared to be a body.

They said they were later able to identify Zarate for police because he had been "the only person walking away" and they remembered that he had a "scowl on his face."

He showed the jury photos of some evidence obtained that day including crime tape around the chair Zarate had reportedly been sitting in, crime scene markers around Steinle's tan sweater and sandals, and medical equipment near large blood stains.

KATE STEINLE CASE THAT LED TO DEBATE OVER US SANCTUARY CITIES, TRUMP’S CALL FOR WALL IS UNDER WAY IN COURT

Zarate, 54, admitted shooting Steinle, but says it was an accident.

Steinle's father testified Monday that before she died, she said to him: "Help me, Dad."

The prosecution said those were her last words.

While Garcia's immigration status is what brought the case into the national spotlight, jurors will not hear evidence about that, and it will not be a factor in the trial.

Steinle's slaying became a signature issue for Donald Trump as he was running for president. He invoked the slaying in calling for the construction of a wall on the Mexican border and stepping up deportations and cracking down on illegal immigration.