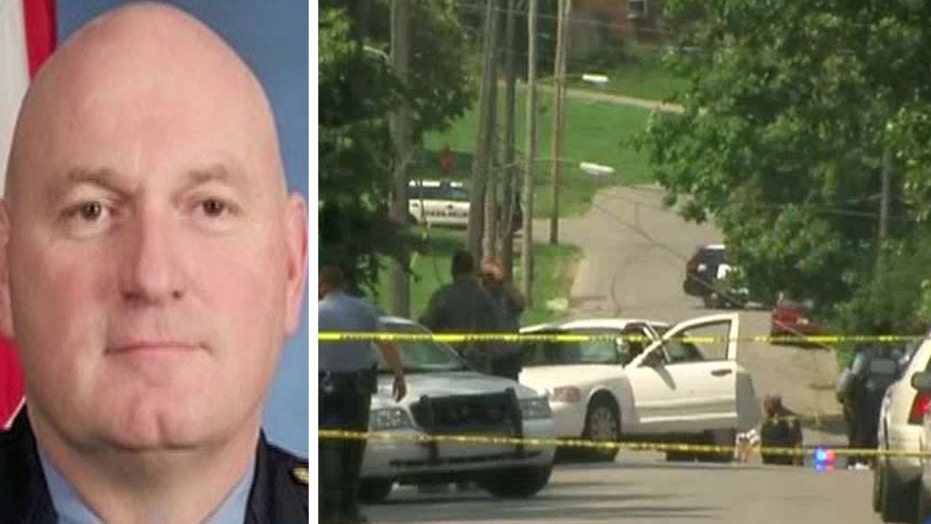 Kansas City police officer killed in the line of duty

Officer was shot and killed while responding to a drive-by shooting, two suspects are in custody

The Kansas City, Kansas police officer shot and killed Tuesday never had the chance to return fire before the suspect in his killing fired several rounds into his patrol car’s passenger window, investigators said Wednesday at a news conference.

Capt. Robert Melton, one of the police officers who responded to reports of a drive-by shooting, died from his injuries at around 2:55 p.m. inside the University of Kansas Hospital, about an hour after the shooting. He arrived at about 2:22 p.m. and did not have a pulse, doctors said.

Authorities said that Melton’s death appears to be the result of a suspect desperate to escape and does not fall in line with “the national narrative of planned attacks against law enforcement officers.”

Kansas City Police Chief Terry Zeigler did, however, stress that "words matter." He spoke to reporters surrounded by religious leaders.

"Hate and anti-police speech has got to stop," Zeigler said. "Because the consequences are real. Our blue line got a little thinner yesterday with the loss of Capt. Melton."

Police did not release the suspects' names because charges hadn't been filed. A third person who had been taken into custody was determined not to have been involved and was released, police said.

Attorney General Loretta Lynch on Wednesday addressed the recent string of shootings killing police officers. "Law enforcement is feeling under siege because of these incidents, and they are tragic... They have continually borne this weight. And certainly we want to highlight the issues today, use them to start a conversation, but let's not forget that our brave men and women in law enforcement have always been engaged in an inherently dangerous undertaking."

It's the second time a Kansas City, Kansas, police officer has been shot and killed this year. In early May, detective Brad Lancaster was fatally shot near the Kansas Speedway, and Melton had served in the police honor guard at Lancaster's funeral. The shooting also comes as police departments across the country are on edge after ambush attacks left eight officers dead in Texas and Louisiana.

"There's a lot of pain and brokenness in our community and our nation right now, and we just want to ask everyone to be prayerful and thoughtful right now," Mayor Mark Holland of the Unified Government of Wyandotte County said.

Melton was a 17-year veteran of the Kansas City, Kansas, Police Department. According to his LinkedIn profile, he had also served in the Kansas Army National Guard and was deployed to Afghanistan from September 2010 to March 2012.

Outside the hospital where Melton died, local Baptist preacher Jimmie Banks — a friend of the city's mayor — sat dejected on a bench, head lowered, after attending the news conference announcing the officer's passing. He said it was painful to sit in that room and see the grief-stricken faces.

"The contributions that peace officers make to protect and serve — they deserve better," said Banks. "When they leave home, the family expects them to return. It's shameful this has happened."