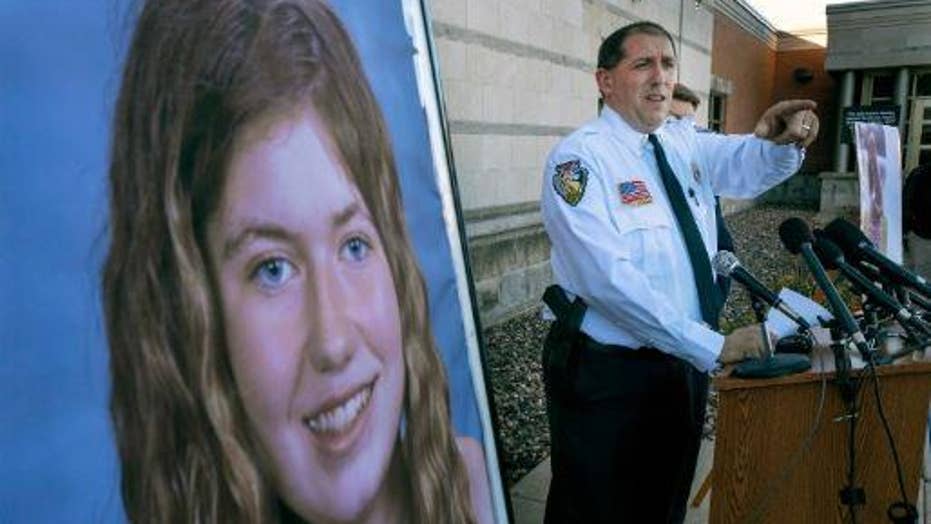 Missing Wisconsin teen Jayme Closs has reportedly been found after fleeing her captor and flagging down a dog walker. A suspect has also been arrested.

Jayme Closs, a teenager who disappeared in Wisconsin last October, has been found alive and a suspect has been taken into custody, officials said.

Closs, 13, was discovered in the town of Gordon in Douglas County by the sheriff's department around 4:45 p.m., the Barron County Sheriff's Department, wrote on Facebook Thursday. She was found about 70 miles from where she was last seen.

Closs vanished on Oct. 15 after her parents were fatally shot at their home in Barron County, located about 80 miles northeast of Minneapolis. Autopsies determined the two died of gunshot wounds and were murdered, and that Closs was inside the home when they were killed.

Milwaukee's Fox 6 reported that authorities were able to find Closs after a tip that was phoned in.

A suspect was taken into custody. Authorities said there is no other information at this time.

FLASHBACK: MISSING WISCONSIN TEEN, 13, IS IN DANGER, NOT A RUNAWAY, COPS SAY, AS SEARCH INTENSIFIES AFTER PARENTS KILLED

The announcement was posted online around 8 p.m. Hours before the official statement, the sheriff's office denied reports that she was located. Officials are planning a press briefing for approximately 10 a.m. Friday.

Local authorities and the FBI launched an investigation into her disappearance and said at the time that they believed the teen was kidnapped. "I'm telling you: Jayme is missing and endangered," Sheriff Chris Fitzgerald said at a news conference in October.

Emergency logs released days later appeared to indicate that the cell phone of Closs' mother, 46-year-old Denise Closs, placed the call and that her father, 56-year-old James Closs, answered the door and was the first to be fatally shot.

“No one talked on that call and we don't know who made it. We heard voices but we can’t make out what was said," Fitzgerald told Fox News in November. "We do believe Jayme was home at the time the call was made.”

Detectives pursued thousands of tips, watched dozens of surveillance videos and conducted numerous searches in the effort to find the girl.

Jayme Closs, 13, vanished on Oct. 15 after her parents were fatally shot at their home in Barron County, located about 80 miles northeast of Minneapolis. (Courtesy of Barron County Sheriff's Department via AP, File)

Roughly two weeks after she disappeared, a man identified as Kyle Jaenke-Annis, 32, was arrested for allegedly burglarizing the Closs' home. He was reportedly found with two girl's tank tops, underwear, and a dress. However, Barron County officials cleared him of any involvement in the teen's disappearance.

The sheriff previously said his office was receiving around 25 tips per day regarding Closs' disappearance. He'd been confident that Closs was alive somewhere.

"I have a gut feeling she's still alive,” Fitzgerald said. “I've always been a glass-half-full kind of guy.”