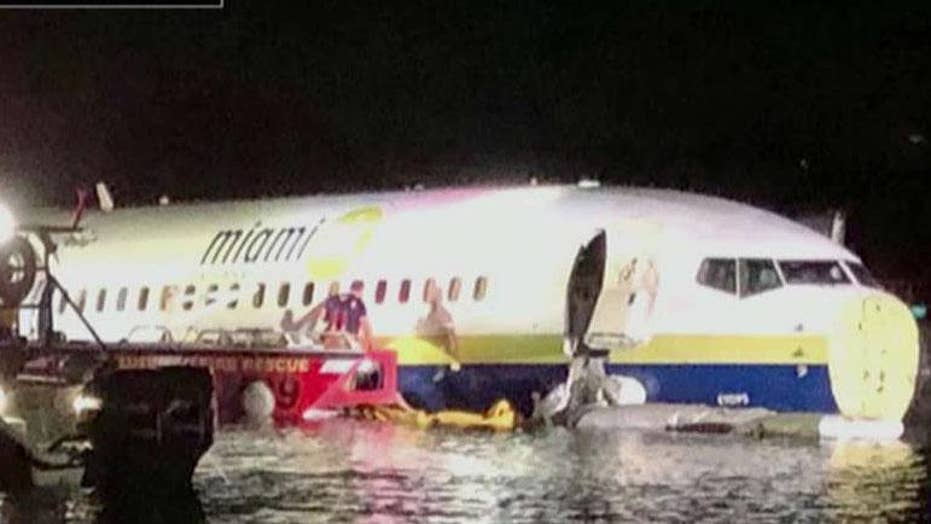 Boeing 737 slides off runway and into river in Jacksonville, Florida

Former Deputy Assistant Transportation Secretary Oliver McGee says that a contaminated runway caused the plane to skid off the runway and into the river. No one was killed in the accident.

Former Deputy Assistant Transportation Secretary Oliver McGee told "Fox and Friends" that a contaminated runway was the culprit behind the Boeing 737 sliding into a river in Jacksonville, Florida on Friday — an event he compared to the Hudson River landing in 2009.

"I also call it a miracle in St. John," he said, referring to the name of the river, "akin to the miracle in [the] Hudson with the great Captain Sully."

Captain Chesley Sullenberger, or "Sully," was the captain credited with saving all 155 people aboard a plane he was forced to land in the Hudson river in 2009.

A charter plane carrying 143 people and traveling from Cuba to north Florida sits in a river at the end of a runway, Saturday, May 4, 2019 in Jacksonville, Fla.  (AP)

During a news conference, Capt. Michael Connor, the commanding officer for the naval base where the plane landed, described the outcome as a "miracle." "I think it is a miracle," he said. "We could be talking about a different story this evening."

NO DEATHS AS PLANE CARRYING US MILITARY CRASHES INTO RIVER

Friday's flight was carrying 136 passengers and seven crew members from Guantanamo Bay in Cuba. According to the Jacksonville Sheriff's Office, minor injuries were reported.<br data-cke-eol="1"> (AP)

Friday's flight was carrying 136 passengers and seven crew members from Guantanamo Bay in Cuba. According to the Jacksonville Sheriff's Office, minor injuries were reported.

Although airlines typically plan for adverse weather, McGee indicated that the rainfall happened too quickly for pilots to adequately prepare.

"The weather was very severe ... They most likely were on the way to their destination when this downpour came," he said when co-host Ed Henry asked why the plane took off from Guantanamo in the first place.