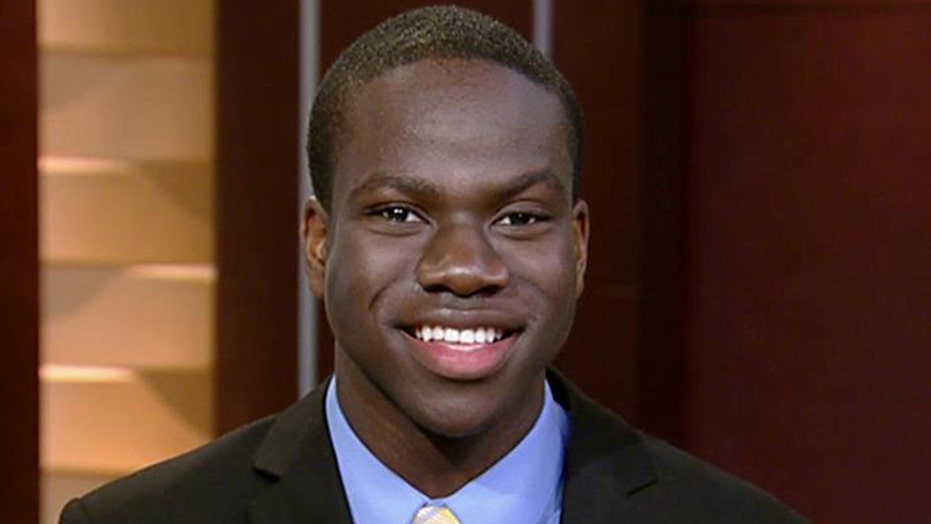 At least two high school seniors in the Class of ’15 made sure it was the Ivy League deans doing the wishing, hoping and finger-crossing, instead of the other way around.

While most college-bound, graduating seniors are nervously checking the mailbox as they eagerly await letters of acceptance, Victor Agbafe, of Wilmington, N.C., and Harold Ekeh, of Elmont, N.Y., both got accepted into all eight of the prestigious schools, and had to choose between the best colleges in America.

“My parents’ hard work and my hard work finally paid off.”

“I don’t think I thought every school that I applied for was going to accept me,” Agbafe told FoxNews.com. “I thought, ‘I’ll be lucky to get into two or three.’ It was such a surprise. I couldn’t believe it was all coming together.”

Agbafe, who was valedictorian at Cape Fear Academy, chose Harvard after being swayed by a presentation from the president and the dean. He fell for their soft-sell.

“I was impressed with their approach,” Agbafe said. “Every other school I visited was amazing, but a lot of them really pushed for me to choose their school over the others.

“But at Harvard, they said to me, ‘You are on your victory tour. Ultimately you are going to choose the school that is best for you.”

The senior also said he was smitten with Harvard’s venerable campus in Cambridge, Mass., and felt it was the perfect mix of campus life and the outside world.

“There’s so much opportunity there and it just seems so well-balanced,” he said.

Don Berger, head of the Cape Fear Academy, predicts success for Agbafe, who plans to study pre-med and public affairs.

“What’s really special about Victor is his leadership,” Berger told FoxNews.com. “He has an uncanny ability to connect with people all around him.

Another student who pulled off the all-Ivy acceptance feat was Harold Ekeh, of Long Island, N.Y. The Elmont Memorial High School senior, who was class salutatorian. He announced Monday night he would be attending Yale.

Ekeh moved with his family from Nigeria to New York when he was just 8, and apparently impressed admission officers with his essay about his family’s journey to America.

“My parents left comfortable lives in Nigeria for their kids to have opportunities, so I take advantage of every single opportunity that has been afforded to me,” Ekeh told the Post. Like Agbafe, he also hopes to become a neurosurgeon. In his spare time, Ekeh mentors youngsters and does volunteer work. He credits his parents for pushing him to study, even during the hard times.

“No matter how many times they would get knocked down, they were always positive,” he told the Post. “Anybody who sees my story can say, ‘If he can do it, I can do it.’ I’m just a kid who had a real strong support system.”

Maisha Walker, president of the Black Ivy Alumni League, said acceptance to all eight schools is rare – even for students whose grades and test scores are in the stratosphere - because the institutions use different criteria to calibrate their student bodies.

"I suspect these students share not only a fantastic intellect but also solid support networks that helped them access the resources they needed to become well-rounded, attractive candidates,” Walker said. “These students should be applauded for their achievement."