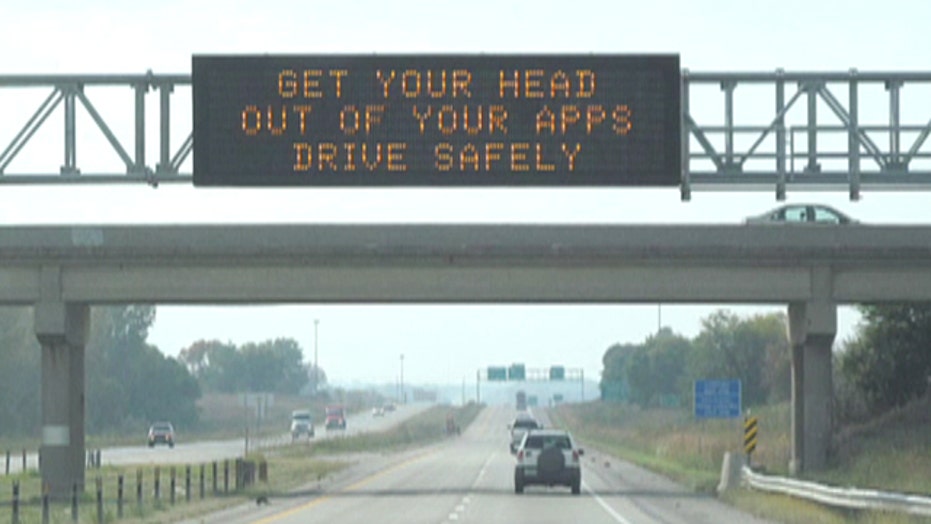 Since the messages began appearing two years ago, drivers have encountered such signs as “It’s all about the belt… the belt. Just click it” -- a play on the pop song “All About That Bass.” Or “Not Buckled? You’re killing me, smalls.”

Close to Christmas one year, the signs displayed, “Santa’s coming. Have you been a good driver?” and for St. Patrick’s Day this year, “Don’t press your luck. No whammies!!”

New signs are posted every Monday, along with a year-to-date driving fatality count. The messages typically have to do with the five leading causes of vehicle deaths, such as driving distracted, drowsy or impaired, not wearing a seat belt and texting.

Paul Trombino, director of the Iowa Department of Transportation, asked his team to come up with catchy signs after seeing another state display fatality counts. His idea was to take it a step further by adding messages, so drivers would keep looking for more.

“I’ve asked them to be edgy, we try to be a little careful with that, but we want it to resonate with the public,” he said. “And I think it’s gotten good response because people look for it on Monday.”

Since launching “Message Mondays” during the Iowa State Fair in 2013, he said there have been fewer driving deaths.

“If you’re going to talk to people about good driving behaviors, you actually do it while they’re driving,” Trombino added.

Landi Sandoval, an Iowa driver, said she likes to see the death counts because she thinks it makes her realize that accidents are happening every week.

Willy Sorenson, a traffic and safety engineerwith the Department, is part of the team that comes up with the signs. He said he thinks about his 17-year-old son when deciding on some of the messages, and how he can get them to grab the attention of teens behind the wheel.

“There’s all kinds of different pop culture things we try to interject here and there to get their attention and hit home,” Sorenson said.

Drivers offer mixed reviews. Some think they’re distracting while others think they’re just another part of the driving landscape.

“The little sayings that they have, maybe shouldn’t be there, because people focus more on trying to read that than they are on the road,” Sandoval suggested.

But Mark, a driver from Iowa who did not give his last name,said he likes to see the messages each week because “people should be looking at signage. It’s part of driving.”

The messages on the signs cycle every two seconds in order to get a driver’s attention but not hold their gaze and become a distraction.

“Just like every other sign you see on the roadway, it’s in your vision when you’re driving,” said Sorenson.

“As long as they’re looking out front or to the sides and constantly moving, making sure they’re constantly scanning the roads, the message will clearly connect with them,” said Trombino.