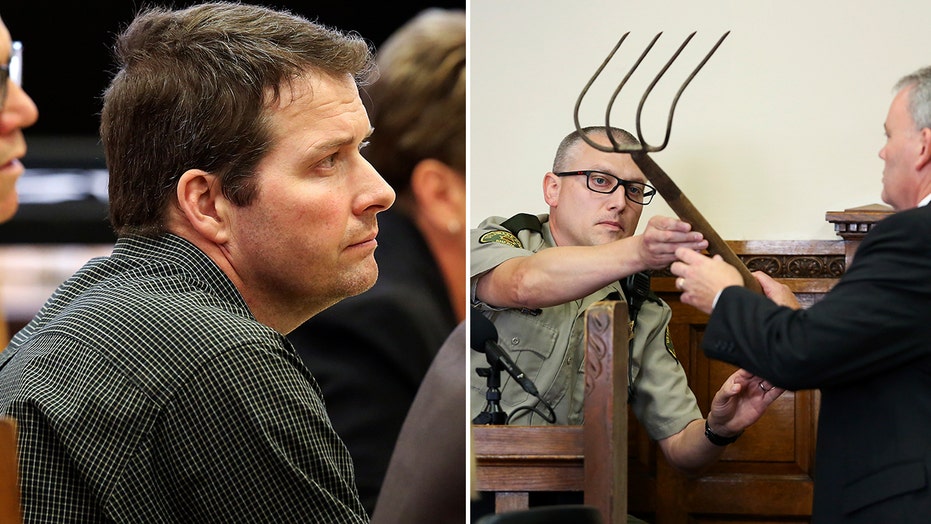 An Iowa hog farmer has been found guilty of fatally stabbing his wife with a corn rake after prosecutors argued he was enraged over her secret affair.

Todd Mullis, 43, was convicted of first-degree murder in the death of his 39-year-old wife, Amy Mullis, following a six-day trial, the Telegraph Herald reported.

Amy Mullis was stabbed with the large rake on Nov. 10 at the couple’s farm, about 40 miles west of Dubuque, authorities said. The couple’s 14-year-old son found his mother impaled on the rake inside a shed after Mullis asked him to check on her, according to the paper.

A jury deliberated for less than eight hours before finding Mullis guilty in the first-degree murder of his wife. (Jessica Reilly/Telegraph Herald via AP)

Jerry Frasher, a farm field manager, testified last week that he was having an affair with Amy Mullis, and that she was deathly afraid of her husband.

"She said she felt like a slave or a hostage around there,” Frasher testified. “She said she was wanting (to leave Todd). One time, she said if he ever found out (about the affair), she would disappear."

WASHINGTON WOMAN CHARGED WITH MURDERING HUSBAND CLAIMS SELF-DEFENSE: 'I THOUGHT HE WAS GOING TO KILL ME'

Mullis claimed his wife, dizzy from a recent medical procedure, accidentally fell on the corn rake, the Herald reported. But an autopsy found her body had six puncture wounds and ruled the death a homicide.

The defense argued that Amy Mullis had startled someone else in the farm’s shed, who impaled her in the back while Todd Mullis was working in a nearby barn with their son.

The first-degree murder conviction carries a mandatory sentence of life in prison without parole.