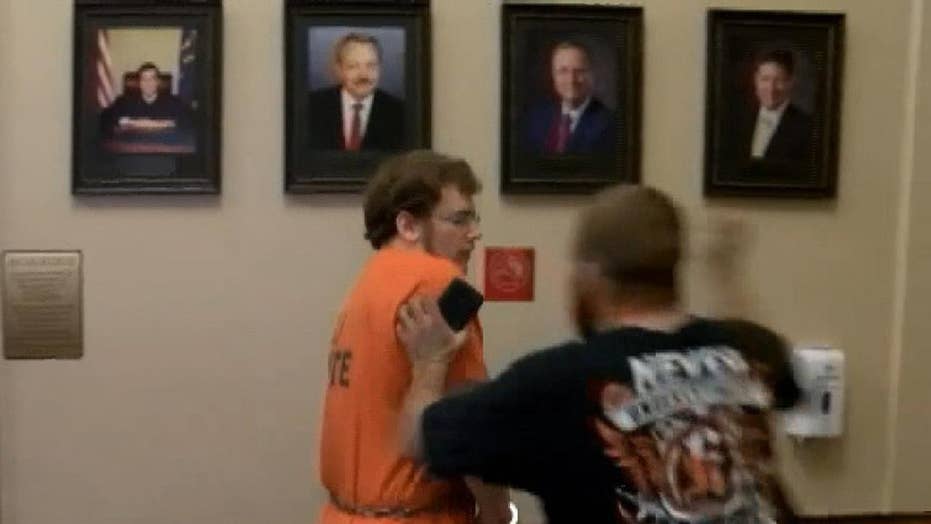 Father sentenced for the death of his three-month-old son, violently attacked outside the courtroom

An Indiana man who was convicted of killing his 3-month-old son was punched in the face by the baby’s uncle in court Wednesday.

Kwin Boes was sentenced to 25 years -- 19 years in prison and six on work release as part of a plea deal, according to FOX59. Boes was also ordered to pay for the child’s funeral expenses, WEVV-TV reported.

CHILD IN INDIANA RESCUED, TAKEN TO HOSPITAL AFTER FALL INTO SEWER DRAIN: REPORTS

As Boes was walking out of court on Wednesday, video captured a man, later identified as Jeremiah Hartley, heading toward him and punching him in the face. Boes was left bloodied and one of his sandals went flying.

“He’s going through some things. He’s upset anyway,” the boy’s grandmother Lisa Hartley told WEVV-TV of Jeremiah. “That really upset him just to see him come out; I don’t know if he heard how much time he got or if he was just upset about his nephew. This is a horrible crime.”

Hartley was taken away in handcuffs and faces 179 days in jail for contempt and a misdemeanor battery charges from the state, the station reported.

Parker Boes died of blunt force trauma to the head, according to FOX59. Kwin Boes was arrested in May 2018 in the baby’s death.