The logo of United Parcel Service is seen on one of the company's delivery trucks in Los Angeles, Oct. 29, 2014. (Reuters)

Scrambling to deliver a crush of holiday shipments before Christmas, United Parcel Service Inc. is using hundreds of its accountants, marketers and other office staff to deliver packages at the last minute.

UPS normally has “ready teams,” or office workers that help to sort, load or deliver packages, that it sends out to clear problem spots throughout the network. The initial sign ups are voluntary and usually set weeks before the busiest periods.

But UPS had to supplement those workers this year by calling in employees from various desk jobs with little notice. Some are delivering packages using their personal vehicles. A shift to online shopping coupled with a tight market for seasonal workers left gaps in manpower across the delivery network.

UPS spokesman Steve Gaut said “several hundred” office employees have been assigned to various operations roles, from sorting packages to assisting drivers as seasonal helpers, over the last few weeks. He acknowledged the number was higher than in the past but declined to say by how much.

“In some cases people were asked to change clothes and go to a local site that day or the next day because incoming volume tendered in trailer loads to specific sites was beyond the plan level,” Mr. Gaut said. “UPS wanted to ensure we avoided getting behind.” He said that most of those temporary field jobs have now ended.

"In some cases people were asked to change clothes and go to a local site that day or the next day because incoming volume tendered in trailer loads to specific sites was beyond the plan level. UPS wanted to ensure we avoided getting behind."

UPS, after processing a record number of packages out of its main Louisville, Ky., hub Thursday night, is “well-positioned to finish pre-Christmas deliveries strong, in line with customer commitments,” Mr. Gaut said on Friday.

The company plans to continue deliveries on Saturday, including in some markets where it hasn’t fully rolled out weekend service, and has contingency plans to deliver packages on Sunday “if there are exceptional events in specific locations.”

UPS needs to react quickly to curveballs in the cadence of the peak delivery period, when daily package volumes double from normal levels, to avoid bottlenecks as the next surge of packages flow through the network. UPS works closely with retailers for months to map out how many orders are expected to flow out from which hubs and into what markets. This year, it started charging extra fees for deliveries during peak shipping days.

Like other delivery companies, UPS needs to balance the need for delivering all of its packages on time with keeping a tight lid on costs. “Finance is trying to manage costs and maximize profits for shareholders, while operations is trying to ramp up the staffing so they can process all the volume,” said John Haber, chief executive of the supply chain consultant Spend Management Experts. “You have two competing factions.”

Following congestion that added a day or two to delivery promises following Cyber Monday, UPS sent ready teams to Atlanta, Denver, Kansas City and Houston to assist in processing packages. It has also asked some of its regular drivers to work 70 hours over an eight-day period, instead of 60 hours over seven days.

UPS performance has improved since, according to Satish Jindel, president of ShipMatrix Inc., a software provider that analyzes shipping data. UPS deliveries through its ground network arrived on time 97.3% of the time for the week ended Dec. 16, while 98.1% of FedEx Corp.’s ground deliveries arrived on time. Both levels were equal to or better than last year.

This year’s challenges were amplified by a tighter than usual market for seasonal workers. A robust economy and unemployment rate of 4.1% in November, the lowest since December 2000, is shrinking a pool of workers that can help fulfill orders for only a few weeks. “It was more competitive in some markets to recruit and retain seasonal employees,” Mr. Gaut said.

UPS originally targeted hiring 95,000 seasonal employees this year, about the same level as the past two years, and continued to hire some workers late into the season to address turnover. The flat hiring number came despite projection of a 5% increase in volume to about 750 million packages. UPS has said that it kept its hiring figure steady because of more automated equipment and additional workers brought on board earlier in the year.

UPS faces competition for seasonal work from a host of places, from online warehouses, retailers or other delivery companies. Rival FedEx forecast hiring 50,000 seasonal workers, close to last year’s total, while Amazon.com Inc. said it was looking to hire 120,000 U.S. workers for the holiday season, the same as last year. 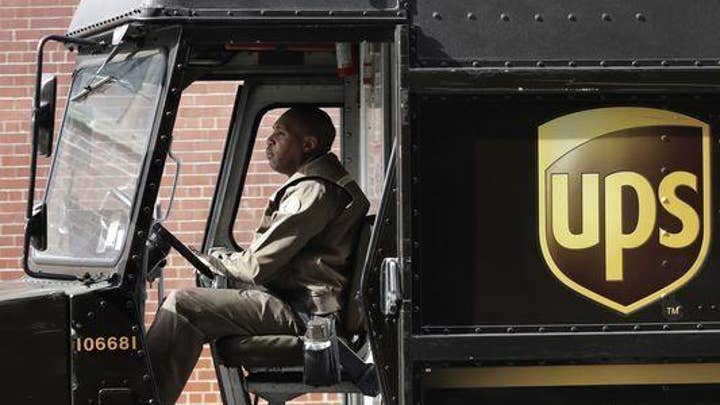 Another problem during the final week is weather. FedEx on Saturday warned of possible delays, as severe wind shear at its main Memphis hub had caused “substantial flight and sort disruptions.”

A FedEx spokesman said Saturday evening that the carrier expects “to make our deliveries despite flight delays.”