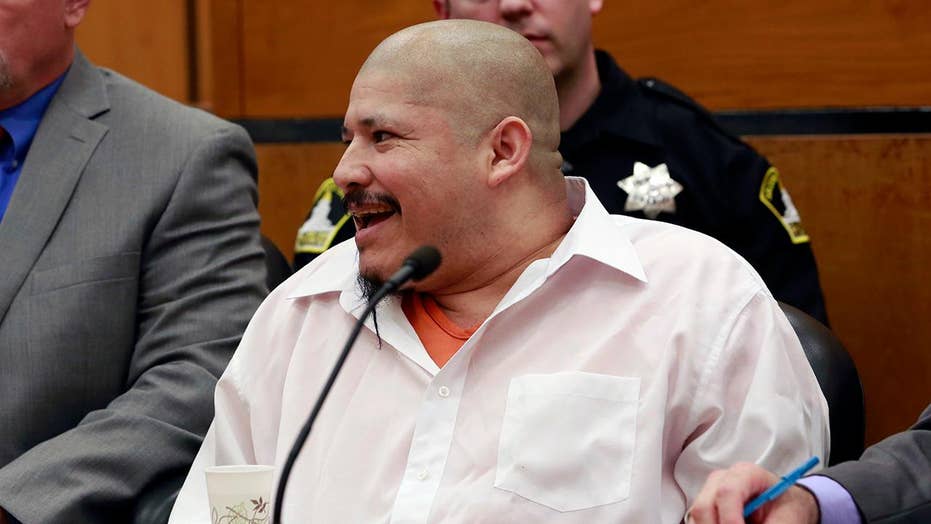 An illegal immigrant charged with killing two California deputies in 2014 cheered after being found guilty of murder and threatened “to kill more cops soon” as he was taken away.

Bracamontes smiled and softly said, “Yay,” after the first verdict was read. Later, as he was being taken out of the courtroom, he said, “I’m going to kill more cops soon.”

Bracamontes has had other outburst since his trial began on Jan. 16. He interrupted the court with a profanity-laced rant, calling one of the slain officers a “coward.”

"I wish I had killed more of the mother-------s," Bracamontes told the court. He continued: "I will break out soon and I will kill more, kill whoever gets in front of me. ... There's no need for a f---ing trial."

Defense attorneys argued that Bracamontes was mentally ill and high on methamphetamine during the shootings and should be spared. But a judge found him competent to stand trial.

Prosecutors will seek the death penalty for Bracamontes when the sentencing phase of his trial begins March 5.

Bracamontes, a Mexican citizen who repeatedly entered the United States illegally, has shouted in court that he is guilty and asked to be put to death. He has also threatened to kill his defense attorneys.

Family members of the victims didn't speak to reporters after the hearing.

President Donald Trump's re-election campaign aired a 30-second ad last month featuring Bracamontes and accusing Democrats of being "complicit" in the slayings of law enforcement officers by people in the U.S. illegally.

It was released on the anniversary of Trump's inauguration amid a government shutdown sparked by Democrats' refusal to support a spending plan unless Republicans agreed to protect hundreds of thousands of young immigrants from deportation.

Public defenders Jeffrey Barbour and Norm Dawson argued unsuccessfully that anti-immigrant sentiment prompted by Trump made it unlikely that Bracamontes could get a fair trial.

Sacramento County Sheriff Scott Jones called Bracamontes a "despicable human being" regardless of his immigration status.

Jones, who ran unsuccessfully for Congress, waged a public campaign against the immigration policies of former Democratic President Barack Obama after the deputies were killed.

"The fact that he's an illegal alien or an undocumented immigrant, been removed four times, that doesn't make him evil. He is evil because he's a despicable human being that just happens to be here illegally," Jones said after the verdict.

A separate jury is considering whether Bracamontes' wife, Janelle Monroy, an American citizen, should be convicted of murder. She has contended that she was a victim of her abusive and paranoid husband who frequently used meth, marijuana and alcohol during a meandering journey across several western states, from their home in Utah to Sacramento.

Investigators said he shot Oliver outside a Sacramento motel, triggering a manhunt and chase that lasted hours and spanned 30 miles. It ended after authorities say he shot Davis and surrendered following a lengthy standoff.