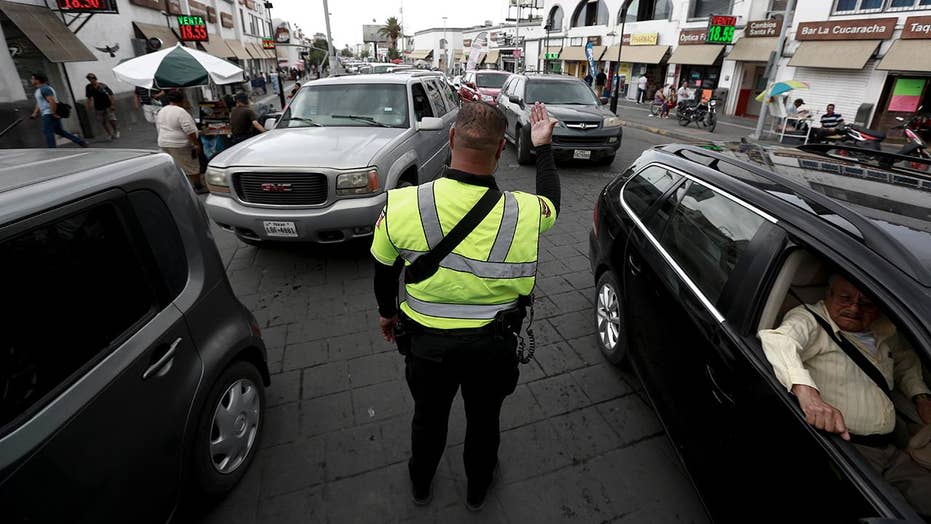 U.S. Immigration and Customs Enforcement (ICE) said Wednesday that its officers had raided seven food processing plants in Mississippi and detained approximately 680 "removable aliens" in what a federal prosecutor described as "the largest single-state immigration enforcement operation in our nation's history."

"The execution of federal search warrants today was simply about enforcing the rule of law in our state and throughout our great country," U.S. Attorney Mike Hurst said in a statement. " I commend these federal agents, our state and local law enforcement partners, and our federal prosecutors for their professionalism and dedication to ensure that those who violate our laws are held accountable."

In Morton, 40 miles east of Jackson, workers filled three buses — two for men and one for women — at a Koch Foods Inc. plant. Workers had their wrists tied with plastic bands and were told to deposit personal belongings in clear plastic bags. Agents collected the bags before they boarded buses. About 70 family, friends and residents waved goodbye and shouted, "Let them go! Let them go!" Later, two more buses arrived.

Workers who were confirmed to have legal status were allowed to leave the plant after having their trunks searched. Some employees tried to flee on foot but were captured in the parking lot.

"It was a sad situation inside," said Domingo Candelaria, a legal resident and Koch worker who said authorities checked employees' identification documents.

"All the unlawfully present foreign nationals arrested Wednesday are being interviewed by ICE staff to record any potential mitigating humanitarian situations," ICE said in a statement. "Based on these interviews, and consideration of their criminality and prior immigration history, ICE is determining on a case-by-case basis based on the totality of the circumstances which individuals will be detained and which persons may be released from custody at present."

“HSI’s [Homeland Security Investigations] worksite enforcement efforts are equally focused on aliens who unlawfully seek work in the U.S. as well as the employers who knowingly hire them,” HSI New Orleans Special Agent in Charge, Jere Miles said in a statement.

A hangar at the Mississippi National Guard in Flowood, near Jackson, was set up with 2,000 meals to process employees for immigration violations on Wednesday. There were seven lines, one for each location that was hit.

"I've never done anything like this," Chris Heck, resident agent in charge of ICE's Homeland Security Investigations (HSI) unit in Jackson, told The Associated Press inside the hangar. "This is a very large worksite operation."

Such large raids were common under President George W. Bush, most notably at a kosher meatpacking plant in tiny Postville, Iowa, in 2008. Nearly 400 workers, mostly Guatemalans, were swept up and jailed as a result of that operation. President Barack Obama avoided them, limiting his workplace immigration efforts to low-profile audits that were done outside of public view.

Trump resumed workplace raids, but the months of preparation and hefty resources they require make them rare. Last year, the administration hit a landscaping company near Toledo, Ohio, and a meatpacking plant in eastern Tennessee. The former owner of the Tennessee plant was sentenced to 18 months in prison last month.

Koch Foods, based in Park Ridge, Ill., is one of the largest poultry producers in the U.S. and employs about 13,000 people, with operations in Mississippi, Alabama, Georgia, Illinois, Ohio and Tennessee. Forbes ranks it as the 135th largest privately held company in the U.S., with an estimated $3.2 billion in annual revenue. The Morton plant produces more than 700,000 tons of poultry feed a year, company officials said in February.

Immigration agents also hit a Peco Foods Inc. plant in Canton, about 35 miles north of Jackson. The company, based in Tuscaloosa, Alabama, says it is the eighth-largest poultry producer in the U.S. A company representative did not immediately respond to a telephone call or email seeking comment.