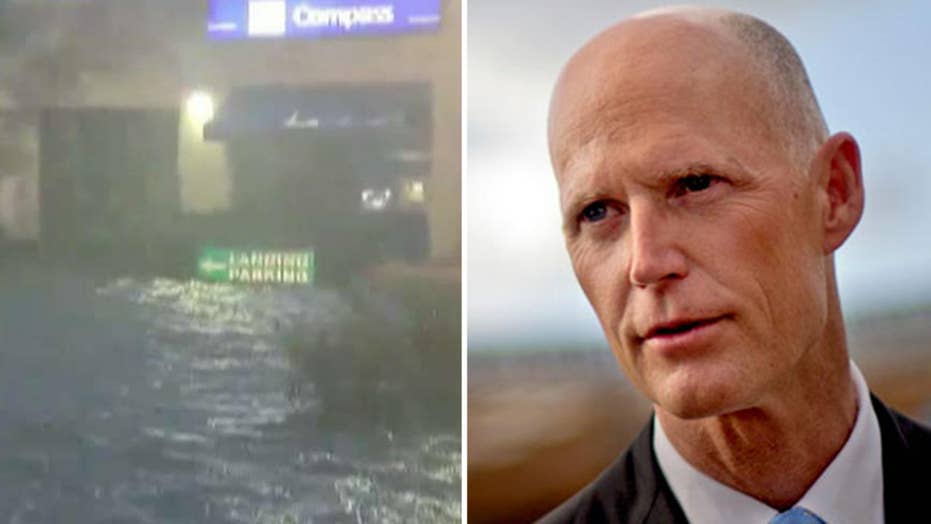 Gov. Scott: We're working hard to get Fla. back to normal

The hurricane's maximum sustained winds weakened to 85 mph with additional weakening expected. As of 2 a.m. EDT, the storm was centered about 25 miles northeast of Tampa and moving north-northwest near 15 mph.

Irma continues its slog north along Florida's western coast having blazed a path of unknown destruction. With communication cut to some of the Florida Keys, where Irma made landfall Sunday, and rough conditions persisting across the peninsula, many are holding their breath for what daylight might reveal.

Forecasters say they expert Irma's center to stay inland over Florida and then move into Georgia, Alabama and Tennessee.

They also expect Irma to weaken further into a tropical storm over far northern Florida or southern Georgia on Monday as it speeds up its forward motion. The hurricane center says the storm is still life-threatening with dangerous storm surge, wind and heavy rains.

More than 3.3 million homes and businesses -- and counting -- have lost power in Florida as Hurricane Irma moves up the peninsula.

The widespread outages stretch from the Florida Keys all the way into central Florida.

The power outages are expected to increase as the storm edges further north.

There are roughly 7 million residential customers in the state.

The county administrator in the Florida Keys says crews will begin house to house searches Monday morning, looking for people who need help and assessing damage from Hurricane Irma.

Once it's light out, they'll check on survivors. They suspect they may find fatalities.

Gastesi says they are "prepared for the worst."

But The Associated Press has been texting with John Huston, who has been riding out the storm in his house on Key Largo, on the Atlantic side of the island, just south of John Pennekamp Coral Reef State Park.

Every few minutes during the height of the storm, he sent another dispatch.

He described whiteout conditions, with howling winds that sucked dry the gulf side of the narrow island, where the tide is usually 8 feet deep. He kept his humor though, texting to "send cold beer" at one point. Now he sees furniture floating down the street with small boats.

He says the storm surge was at least 6 feet deep on his island, 76 miles from Irma's eye. He can see now that structures survived, but the storm left a big mess at ground level.

Irma set all sorts of records for brute strength before crashing into Florida, flattening islands in the Caribbean and swamping the Florida Keys.

It finally hit the mainland as a big wide beast, but not quite as monstrous as once feared. The once-Category 5 storm lost some of its power on the northern Cuba coast.