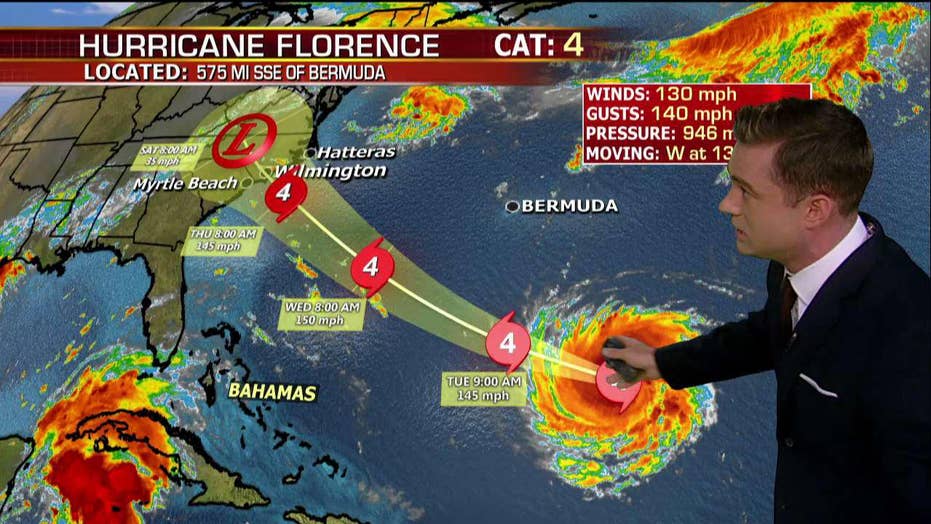 Rapidly intensifying hurricane expected to remain a category 4 storm until landfall along the Carolinas; Adam Klotz reports from the Fox Extreme Weather Center.

The already powerful Hurricane Florence grew even stronger early Monday afternoon as the storm continued barreling across the Atlantic Ocean with an eye set on parts of the U.S. mid-Atlantic coast.

Forecasters at the National Hurricane Center said in a special noon advisory, that Florence rapidly intensified to a potentially catastrophic Category 4 hurricane with maximum sustained winds near 130 mph.

Only an hour before, Florence had been upgraded to Category 3 strength. But the storm soon grew stronger as it moved over warm Atlantic waters. Its center will move between Bermuda and the Bahamas from Tuesday to Thursday, before approaching the Carolinas on Thursday.

HURRICANE HELENE STRENGTHENS OFF COAST OF AFRICA, CHURNS IN ATLANTIC

Up and down the coast, residents were rushing to ready emergency kits, map out escape routes and secure their homes in preparation for the onslaught of rain and wind the intensifying storm is expected to bring.

The governors of North and South Carolina and Virginia declared states of emergency far ahead of landfall, while mandatory evacuation was ordered for the Outer Banks. South Carolina Gov. Henry McMaster also suspended his campaign and asked President Donald Trump for a federal emergency declaration.

“Somebody is going to suffer devastating damage if this storm continues as it is currently forecast,” Dan Miller, a meteorologist with the National Weather Service in Columbia, told The State newspaper.

Eric Blake, a hurricane specialist with the Miami-based center, wrote in a previous advisory that a warm ocean is the fuel that powers hurricanes, and Florence is moving over waters where temperatures are peaking near 85 degrees. He said with little wind shear to pull the storm apart, Florence’s hurricane wind field is expected to expand over the coming days.

“The bottom line is that there is increasing confidence that Florence will be a large and extremely dangerous hurricane, regardless of its exact intensity,” Blake said.

Preparations have intensified up and down the densely populated coast.

Navy ships off Virginia’s coast are preparing to sail out ahead of Florence making landfall. There are nearly 30 ships preparing to get underway from the Naval Station Norfolk and Joint Expeditionary Base Little Creek.

“Our ships can better weather storms of this magnitude when they are underway," said U.S. Fleet Forces Commander Adm. Christopher Grady in a news release earlier this weekend.

Meanwhile, the University of North Carolina at Wilmington has canceled classes and an upcoming alumni weekend, encouraging students to leave campus for a safer location.

Officials warn Florence could slow or stall on or near shore, potentially causing devastating inland flooding.

"Pretend, assume, presume that a major hurricane is going to hit right smack dab in the middle of South Carolina and is going to go way inshore," McMaster said. The state's emergency management agency said it is "preparing for the possibility of a large-scale disaster."

In coastal Charleston, city officials offered sandbags to residents. Myrtle Beach Mayor Brenda Bethune urged people to secure their homes but said it was too early to know if evacuations will be ordered.

"Literally, they are filling buggies full of water, shopping carts full of water," Ryan Deeck, grocery department manager at a Walmart, told The Sun News. "They're coming in and buying water and plates, and that's about all they're buying."

Lining up behind Florence, Isaac was about 1,150 miles east of the Windward Islands with top winds of 75 mph early Monday, moving west at 14 mph. Isaac's forward movement was accelerating on a path to cross into the lower Caribbean on Thursday.

Helene, meanwhile, was still in the Atlantic's spawning ground for hurricanes off the coast of Africa, swirling with 105 mph winds and forecast to become a major hurricane, about 375 miles west of the Cape Verde islands.