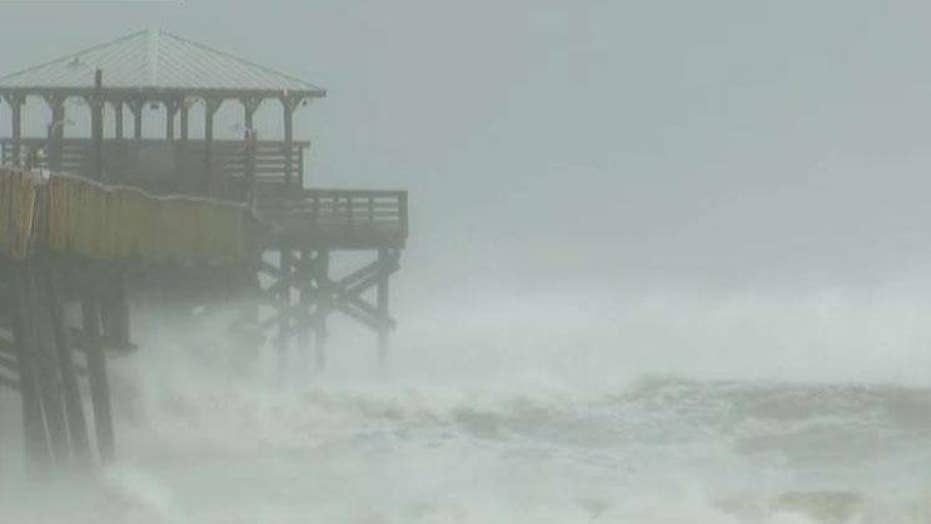 Myrtle Beach mayor: If you are evacuating, do it now

Brenda Bethune expects conditions to deteriorate rapidly ahead of Hurricane Florence's landfall, says authorities are hoping for the best but preparing for the worst.

Homeless men and women in the Carolinas and mid-Atlantic states who must seek shelter every night face a daunting task on Thursday evening: finding a safe place to ride out a potentially devastating storm.

Evacuating for the Category 2 hurricane is a perilous decision that several people decided not to make for financial reasons. As for those who have no homes at all, figuring out how to secure shelter is bound to involve even tougher and riskier calculations.

J. Denise Williams Cromwell, founder of Project Street Outreach, a group that helps homeless veterans in Charleston, South Carolina, said she’s been spending all her time in the moments leading up to Florence's landfall making sure the people she serves have supplies, information about emergency shelters and her personal phone number.

Many, she said, have chosen to ride out the storm in whatever place they already have -- a camper, for instance, or a “shack” -- instead of heading to a designated emergency shelter.

“In their minds, they believe they can handle it simply because of the military training they have,” Cromwell told Fox News.

Tony Clower, a 39-year-old in Kinston, North Carolina, told the Citizen Times in Asheville that he believes people should heed Gov. Roy Cooper’s warning to get out of the storm's path. But for him, that’s not an option.

“I have no money, no job, no connections,” he said.

Kinston is about 55 miles inland from Emerald Isle.

During the storm, Jasper Newborn said he would not turn anyone away from the emergency homeless shelter he runs in Kinston. He told the Citizen Times that the shelter is really only big enough to accommodate 35 people, and is the only one in town.

HURRICANE FLORENCE COULD BRING LIFE-THREATENING FLOODS, CONDITIONS TO AREAS AWAY FROM COASTLINE

Residents of a homeless encampment known as “Tent City” in Durham are making preparations as well. Though the community isn't coastal, it could still face life-threatening conditions. Indeed, experts have warned that Florence could give rise to tornado activity, flash flooding and mudslides in areas further inland.

Randy Dean told The Durham VOICE that he has a tent, but it is not in the best shape.

“I caught pneumonia and the flu during a snowstorm living in my raggedy tent. Rain is just going to pour inside,” Dean said. “I’m not staying in a tent during the storm. If the shelters are full, well, I’ll go to the hospital and tell them I’m thinking of killing myself.”

According to The VOICE, police officers have visited the camp to deliver information about the Durham Rescue Mission, which has a plan to help shelter the homeless.

Cromwell encouraged people to remember those who are homeless when they are buying their own supplies.

“Pick up something extra and drive past [where they are] and just offer a care bag or just whatever,” Cromwell suggested.