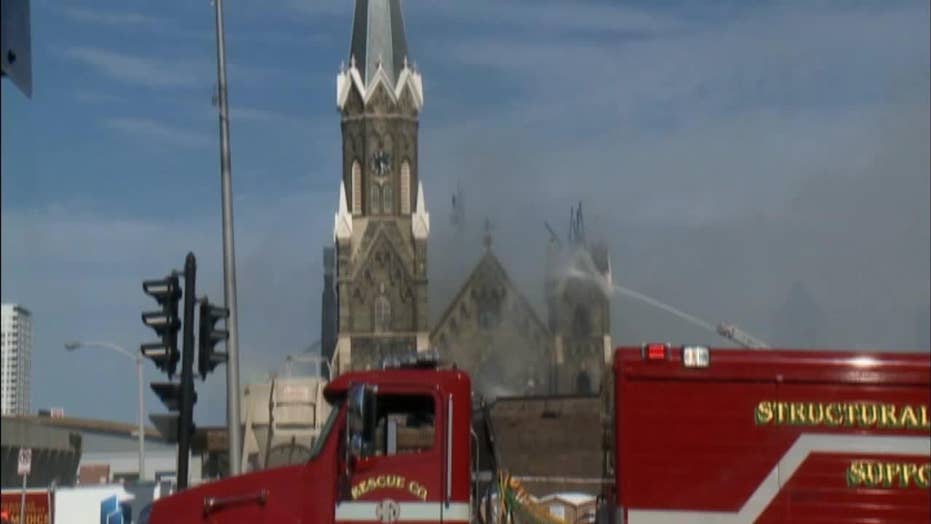 Flames burned through the roof of Trinity Evangelical Lutheran Church, authorities are investigating the cause of the fire.

A fire tore through a historic church in Wisconsin on Tuesday, sending heavy smoke and flames spiraling through the air.

Brian Smith, of the Milwaukee Fire Department, said no injuries were reported and said "everyone is accounted for at this time."

As of 5:30 p.m. local time, 85 personnel were reportedly still working to put the fire out.

"It required us to call in extra equipment," Smith said. "With a church of this size — required a lot of aerial ladder trucks...with water towers aiming toward the building to put the fire out."

One of the building's steeples, according to Fox 6, collapsed. The church endured a fire last year, and was remodeled in recent years.

The Trinity Evangelical Lutheran Church, which is part of the Lutheran Church-Missouri Synod, opened in 1847 by German immigrants. It's listed on the National Register of Historic Places and is also a state and city landmark.

Smith said it's "too early to tell" how and where the fire started, but said a call came in around 3:45 p.m. about a fire on the roof.

Residents in the area expressed concern for the church. Dinnel Murphy told the Milwaukee Journal Sentinel "it's a shame."

"It's a beautiful building," Murphy said. "It's been there forever. It helps the poor and homeless, too."