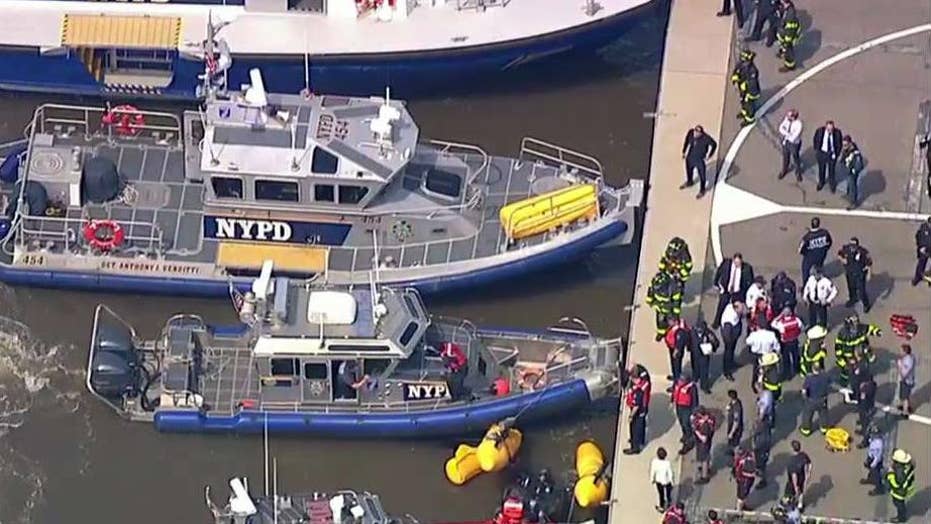 The helicopter fell short of the landing pad on West 30th Street.

A helicopter fell short of its landing pad, located on West 30th Street, and went down in the Hudson River Wednesday, the FDNY confirmed to Fox News.

It happened in the vicinity of 12th Ave and West 34th Street in New York City and authorities were called to the scene at 2:26 pm. The FDNY boat and land were dispatched to the scene.

The pilot landed on the river, exited the helicopter, and was rescued by a NY Waterway ferry crew aboard the Gov. Thomas Kean ship. Additionally, the helicopter has been secured, the FDNY said.

Capt. Adam Sciaino was carrying passengers between West 39th Street in Manhattan and 14th Street in Hoboken when he saw the helicopter go down at about 1:20 p.m., making it his second rescue in 10 years.

Deckhand Edwin Montoya deployed the Jason’s Cradle rescue device off the bow of the ferry and pulled the pilot aboard.  There was no one else on the helicopter.

“It was just instinct. Just another day for NY Waterway rescues," Sciaino said. "We’re right here. Edwin Montoya is an outstanding deckhand.  He moved instantly to the rescue."

Currently, the pilot and one heliport worker that was injured by debris are being treated for non-life-threatening injuries, according to the FDNY.

When the FDNY descended on the scene, "the pilot was exiting the helicopter and getting onto a civilian boat,"  FDNY Firefighter Tim O’Neill told Fox News.

"Firefighter Chris Morgan and I entered the helicopter in the water to make sure there were no additional passengers. The rear part of the cabin had already begun to fill up with water. We verified that the emergency fuel was shut off, and secured the helicopter using ropes to the bulkhead and an FDNY Marine unit. We train for this – we are set up for scuba diving, and were prepared for a surface rescue or a dive into a submerged helicopter."

The NY Waterway crews have rescued almost 300 people from the waters of New York Harbor, including 143 people rescued from U.S. Airways Flight 1549 in “The Miracle on the Hudson."

Authorities are advising pedestrians to avoid the area.