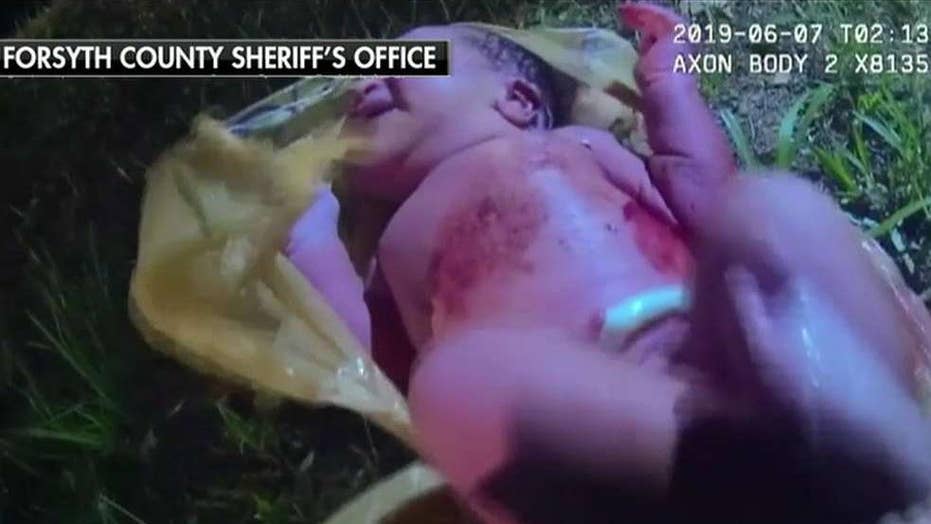 A Georgia sheriff is begging the public to help find the mother of a child who was found wrapped in a plastic bag in the woods.

Sheriff Ron Freeman appeared on "Outnumbered" Wednesday afternoon to give an update on newborn "Baby India" after his department released body camera footage of their rescue in the hopes it might bring more information about the girl.

Freeman called the discovery "miraculous but horrific," adding it struck a chord with the officer who carefully unwrapped her from the plastic bag. Deputy Terry Roper's body cam video shows officers tending to the child, and he can be heard saying: "I'm so sorry. Oh my goodness."

"He was the first one who showed her love," Sheriff Freeman said of his colleague, who is a father himself.

NEWBORN FOUND ABANDONED ATOP TRASH CAN IN CHICAGO ALLEY: OFFICIALS

Freeman said the officers who found "Baby India" rendered first aid immediately and rushed her to the hospital alongside firefighters and EMTs. The police were first alerted to the situation when a family returning from a trip noticed a strange sound about 300 feet from their home which sounded like an animal.

Thousands of people have called the Forsyth County Sheriff's Office inquiring about adopting the child but, at the moment. they are focused on locating her family, Freeman said.

"Somebody knows someone who was pregnant," he said. "This was a near full-term. They're not pregnant now, and there's no child. That's kind of inexplicable."

ONSTAR ALERT LEADS TO RESCUE OF FLORIDA BABY FROM HOT CAR AFTER MOM PASSES OUT INSIDE: DEPUTIES

As of now, "Baby India" is in the care of the Department of Family and Children's Services and has been placed in a foster home.

"Amazingly, she is doing fantastic right now," he added. "She's got almost 500 deputy sheriffs who are her surrogate fathers now. We will do whatever it takes to make sure to find out who abandoned this child, and importantly, why."