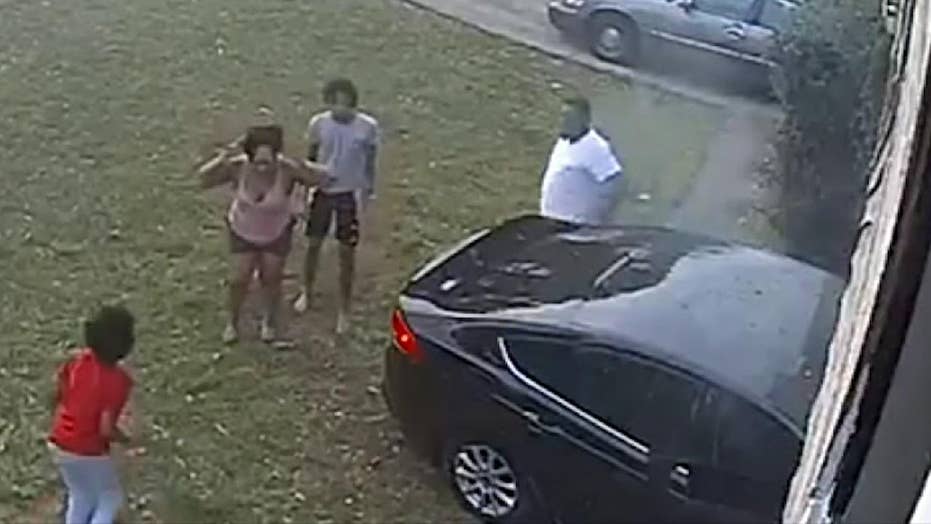 A 9-year-old girl from Georgia was hit by a speeding car while playing in her own front yard on Friday, and now her parents are looking for help identifying the driver.

LaDerihanna Holmes was captured on surveillance footage playing with her friend in the yard of her home in Lithonia, a city around 20 miles east of Atlanta, around 7 p.m., her parents said.

In the footage, which was released by Holmes' family, the two children were seen hanging out on the front sidewalk and lawn.

Suddenly, the car appeared to speed through a stop sign, crossing the street onto the property — and hitting Holmes, pushing her into the house.

Her mother, Charlette Bolton, told The Associated Press that when the car crashed into the house, it felt like an earthquake. She said she screamed for her daughter and ran outside, where she said she saw the girl on the ground, appearing lifeless.

Bolton's 12-year-old son and a man started performing CPR on LaDerihanna, and her mother felt a heartbeat. Holmes' father, Derryl, picked her up and drove her to the hospital.

Her family said she suffered a fractured skull and her pelvic bone was broken in three places. The right valve of her heart was leaking blood, among other injuries, her family said.

An officer with the DeKalb County Police Department reportedly contacted the car's owner, who said her boyfriend had the vehicle while she was at work.

Stewart Trial Attorneys, which has been working on behalf of the family, created a GoFundMe page for Holmes' medical bills which had raised more than $7,500 as of Monday evening. Lawyer L. Chris Stewart said police claimed they had leads in the case.

Bolton said her daughter — despite her injuries — has been talking and laughing, and was scheduled to start physical therapy on Monday. Speaking to the driver of the car, she said: "Y'all thought my baby was dead. Y'all didn't look down at my baby one time, and I want you to turn yourselves in."