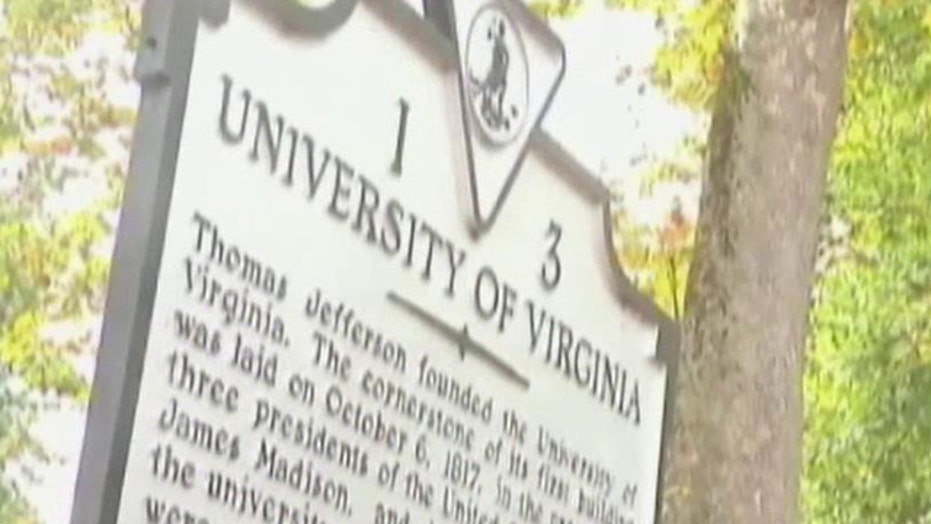 Students say magazine should be held accountable for discredited report

Phi Kappa Psi, the fraternity at the center of the discredited Rolling Stone magazine story about an alleged gang rape at the University of Virginia, said Monday it plans to pursue "all available legal action" against the magazine.

"Our fraternity and its members have been defamed," chapter president Stephen Scipione said in a statement.

The fraternity called the story "reckless," saying that the article was viewed by millions, led to members being ostracized and there was vandalism of the fraternity house.

The review, undertaken by the Columbia Graduate School of Journalism at Rolling Stone's request, produced a 12,000-word report that documented lapses in standard journalistic procedure at every level of the magazine during the reporting and editing of the story.

The report was authored by dean Steve Coll and academic dean Sheila Coronel.

"The abject failure of accountability in journalism that led to Rolling Stone's 'A Rape on Campus' article has done untold damage to the University of Virginia and our Commonwealth as a whole," Virginia Gov. Terry McAuliffe said in a statement Monday. "More importantly, this false account has been an unnecessary and dangerous distraction from real efforts to combat sexual violence on our college campuses. My administration will not allow this shameful episode to stop the momentum we have built working with administrators, law enforcement, students and advocates to keep our campuses safe."

The article, published in the magazine's November 19, 2014 issue, focused on a student identified only as "Jackie," who said she was raped by seven men at a fraternity house. It also described a hidden culture of sexual violence fueled by binge drinking at one of the nation's most highly regarded public universities.

The report found, among other things, that Rolling Stone did not try hard enough to find the person Jackie accused of orchestrating the assault. The report also detailed how writer Sabrina Erdely failed to contact three friends of Jackie whom the story depicted as dissuading her from seeking medical treatment or reporting the alleged gang rape to police.

The report said that contacting the three friends "was the reporting path, if taken, that would almost certainly have led the magazine’s editors to change plans."

However, Coll told The Washington Post that there was no evidence of dishonest reporting. As Coll put it, there was no "inventing facts, lying to colleagues, plagiarism or such, that I would think of as grounds for automatic firing or serious sanction."

Rolling Stone Managing Editor Will Dana is quoted as saying in the report, "It’s not like I think we need to overhaul our process, and I don’t think we need to necessarily institute a lot of new ways of doing things. We just have to do what we’ve always done and just make sure we don’t make this mistake again."

Jann Wenner, Rolling Stone's founder and publisher, told The New York Times that Erdely would continue to write for the magazine and called Jackie "a really expert fabulist storyteller.

"Obviously there is something here that is untruthful," Wenner said of the story's main source, "and something sits at her doorstep."

Dana said magazine officials are "committing ourselves to a series of recommendations about journalistic practices that are spelled out in the report."

Erdely also apologized in a statement, saying she would not repeat the mistakes she made when writing the article and "did not go far enough to verify" Jackie's story.

"Reading the Columbia account of the mistakes and misjudgments in my reporting was a brutal and humbling experience," she said.

The independent review began after news media organizations, particularly The Washington Post, exposed flaws in the article, titled "A Rape on Campus." By Dec. 5, Rolling Stone apologized and acknowledged discrepancies in the article.

"We would like to apologize to our readers and to all of those who were damaged by our story and the ensuing fallout, including members of the Phi Kappa Psi fraternity and UVA administrators and students," Dana wrote on the publication's website.

"Sexual assault is a serious problem on college campuses, and it is important that rape victims feel comfortable stepping forward. It saddens us to think that their willingness to do so might be diminished by our failings."

Dana and Erdely said they had been too accommodating of requests from Jackie that limited their ability to report the story because she said she was a rape victim and asked them not to contact others to corroborate, the report said.

Despite its flaws, the article heightened scrutiny of campus sexual assaults amid a campaign by President Barack Obama. The University of Virginia had already been on the Department of Education's list of 55 colleges under investigation for their handling of sex assault violations.

In a statement Sunday, Sullivan said the Rolling Stone article "did nothing to combat sexual violence, and it damaged serious efforts to address the issue. Irresponsible journalism unjustly damaged the reputations of many innocent individuals and the University of Virginia.

Maggie Rossberg, a second-year nursing student from Crozet, Virginia, said her chief concern is the effect the journalistic lapses will have on rape victims. "This is probably going to discourage other sexual assault survivors from coming forward," Rossberg said.

During a press conference Monday, Coll said it "would be a really unfortunate outcome if journalists backed away from doing this kind of reporting" based on the Rolling Stone incident.

"These false accusations have been extremely damaging to our entire organization, but we can only begin to imagine the setback this must have dealt to survivors of sexual assault," said Stephen Scipione, president of the Virginia Alpha Chapter of Phi Kappa Psi, after the Charlottesville police suspended their investigation.

For its part, Rolling Stone declined to discuss whether the story had undergone legal review.