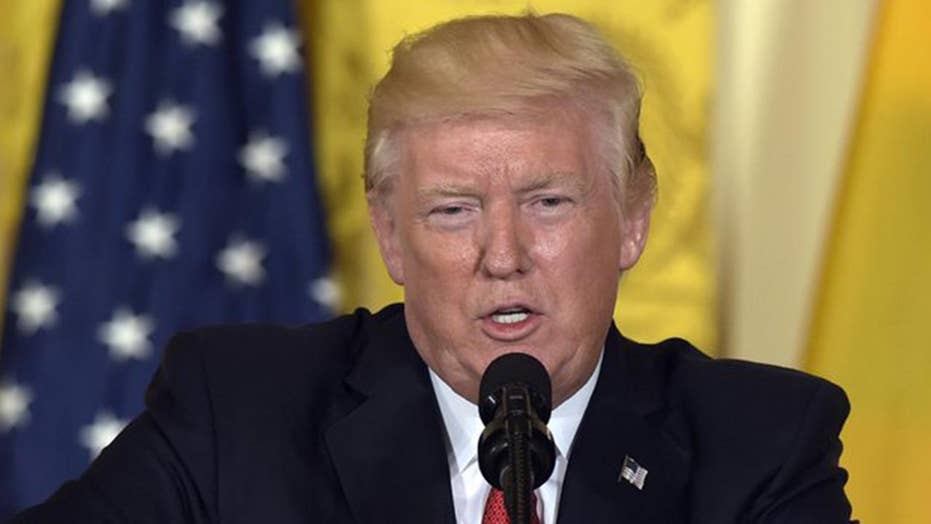 THE LEAD STORY: The Trump administration would consider immigration legislation that includes a pathway to citizenship for hundreds of thousands of young people, the U.S. Homeland Security Secretary Kirstjen Nielsen said in an interview ... Nielsen told the Associated Press no decision has been made and a border wall remains President Trump's priority. Congress is considering three options, including citizenship or permanent legal status for people who were temporarily shielded from deportation, she added. White House aides are scheduled to meet with congressional leaders today to discuss immigration – a possible DACA deal, DREAMers, and a border wall.

'MY BUTTON WORKS': President Trump hit back at Kim Jong Un shortly after the North Korean dictator claimed to have a “button” for nuclear weapons on his desk ...  “North Korean Leader Kim Jong Un just stated that the 'Nuclear Button is on his desk at all times,'” the president tweeted. “Will someone from his depleted and food starved regime please inform him that I too have a Nuclear Button, but it is a much bigger & more powerful one than his, and my Button works!” Trump’s response followed Jan. 1 remarks in which Kim claimed the rogue nation's nuclear capabilities are now “reality.”

‘FAKE NEWS AWARDS’: President Trump taunted the media Tuesday night with a mysterious announcement of "the most dishonest & corrupt media awards." ... "I will be announcing THE MOST DISHONEST & CORRUPT MEDIA AWARDS OF THE YEAR on Monday at 5:00 o’clock,” Trump tweeted, without specifying if the event would take place in the morning or the afternoon. “Subjects will cover Dishonesty & Bad Reporting in various categories from the Fake News Media. Stay tuned!” The tweet was the latest shot in a longstanding battle between the president and what he’s derided as the “fake news media.” Based on his past comments, it's clear who could get nominated for the new "awards." CNN, MSNBC, the New York Times, the Washington Post, and ABC News could be among the "contenders."

NEW YORK TIMES - PROFIT AT ANY COST?: The New York Times says the recent deadly protests that have erupted in Iran have not led the company to cancel any of its $8,000 tours being offered this year in the terror-sponsoring nation, as the paper tries to find new sources of revenue ...  At least 21 people have died and hundreds of others have been arrested in the demonstrations, which have erupted in several cities and are the largest since those that followed the disputed 2009 presidential election. Despite the bloodshed, the first Times Journeys excursion to Iran of 2018 is scheduled to take place between March 5 and March 17. The cost: as low as $7,895 -- but not including airfare. The tours, which began in 2015, have stirred criticism among some Iran watchers who accuse the paper -- and journalists who take part in the tours -- of collaborating with the Tehran regime in a moneymaking venture.

AS SEEN ON FOX NEWS

SANCTUARY CONFRONTATION BREWING: "There's no sanctuary from law enforcement. California better hold on tight - they're about to see a lot more deportation officers. If politicians don't protect their communities then ICE will." – Acting ICE Director Thomas Homan, on "Your World with Neil Cavuto," sounding off on California officially becoming a "sanctuary state." WATCH

CNN - 'CANNABIS NEWS NETWORK': "It's very outrageous to see what I would call irresponsible journalism on behalf of CNN." – Corinne Gasper, whose daughter was killed by a driver high on medical marijuana, on "The Ingraham Angle," slamming a CNN New Year's Eve report where correspondent Randi Kaye handled a bong and a lit blunt on live TV. WATCH

John Fund: Will the media ask questions about an FBI cover-up or become complicit in it?

John Stossel: Is 2018 the year of the Libertarian Party?

'Jeopardy!' contestant loses $3,200 for pronunciation of 'gangster' vs. 'gangsta.'

Fox & Friends, 6 a.m. ET: What are the rising health risks of more people smoking marijuana? Dr. Marc Siegel weighs in. A father whose son was killed by an illegal immigrant sounds off on California officially becoming a sanctuary state. And Danica Patrick reveals her secrets for a healthy New Year.

Fox News @ Night, 11 p.m. ET: Former Trump campaign adviser Steve Cortes on the implications of California becoming a sanctuary state and the critical meeting at the White House over the future of DREAMERs and the DACA.

Cavuto: Coast to Coast, Noon ET:  Former Virginia Gov. Jim Gilmore on whether he is considering a run for the Senate this year.

The Fox News Rundown podcast: President Trump has been critical of Iran in the past, calling it a “brutal and corrupt” regime. This week he's showing his support for Iranian protesters via Twitter. Former Obama State Department spokesperson Marie Harf explains why she believes the Trump administration needs to be careful as protests continue.

Extreme weather continues to wreak havoc across a majority of the country. Fox News meteorologist Adam Klotz warns that below freezing temperatures aren't leaving any time soon, and Sabrina McCormick explains how communities are trying to stay ahead of major disasters.

1938: The March of Dimes campaign to fight polio is established by President Franklin D. Roosevelt, who himself had been afflicted with the crippling disease.

Thank you for joining us on Fox News First! Enjoy your day, and we'll see you in your inbox first thing Thursday morning.