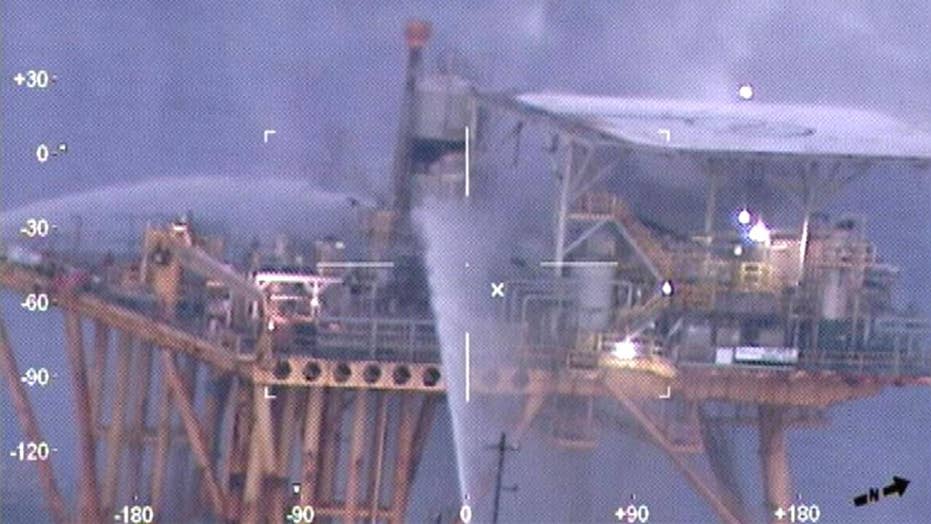 Four workers managed to escape after a fire broke out on an oil production platform in the Gulf of Mexico Thursday, investigators confirmed to Fox News.

"We're still putting water on the fire to make sure the fire doesn't reflash. Then we'll make an assessment, whether or not the structure is safe to go on, then we'll actually do the inspection," Coast Guard Capt. Bryan Dailey told Fox News' "Happening Now."

The fire was reported about 2:30 a.m. Thursday on the platform about 80 miles south of Grand Isle, Louisiana, and was extinguished nearly four hours later, the Coast Guard said in a statement.

There were no reports of injuries and no sign of significant pollution from the fire. Four workers aboard the platform evacuated into the water and were rescued by the crew of the 130-foot Mary Wyatt Milano, a supply vessel, the Coast Guard said.

The Coast Guard and the Interior Department's Bureau of Safety and Environmental Enforcement are investigating.

"They're overhead and they're getting a better view of the situation," Magee said.

Clean Gulf, an oil spill response organization, was on its way to the platform early Thursday. Clean Gulf is a nonprofit oil industry cooperative that responds to spills and provides equipment to help clean them up, according to its website.

An oil platform exploded and sank in the Gulf of Mexico in April 2010, killing 11 workers. Millions of gallons of oil spewed into the Gulf for weeks before the oil well could be capped.

Fox News' Jenna Lee and The Associated Press contributed to this report.