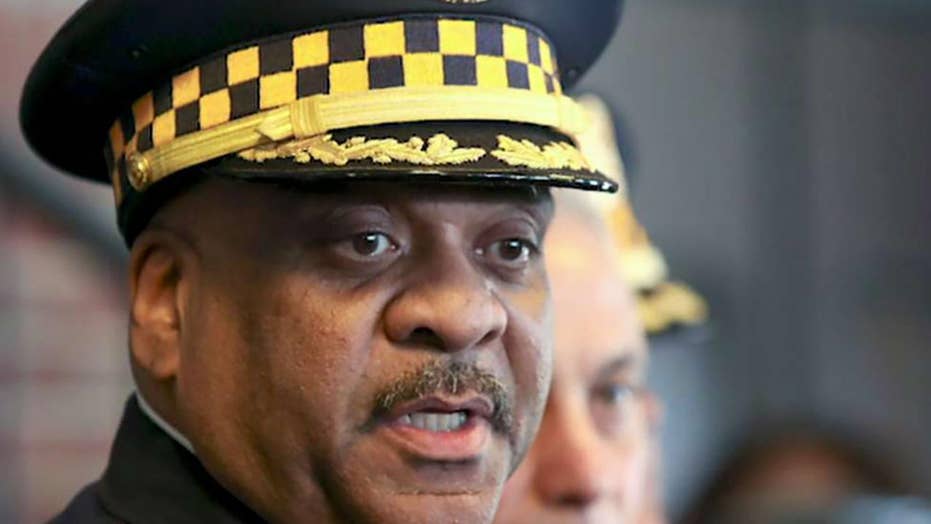 Chicago FOP President Kevin Graham says he is going to thank President Trump for his support of law enforcement.

The Chicago police chief fired this week for committing a "series of ethical lapses" is now fighting back claims that he intentionally misled the city's mayor and the public following an Oct. 17 incident in which he was found asleep in his car.

In his first public comments since his dismissal Monday by Mayor Lori Lightfoot, Eddie Johnson said in a statement that he made a “poor decision and had a lapse of judgment” that October night, which "was a mistake and I know that."

Yet he added that he has "no interest in fighting a battle" for his reputation with those who "want to question it now.”

“One thing I want everyone to know is this: I did not intentionally mislead or deceive the Mayor or the people of Chicago," read the statement issued by his attorney and obtained by the Chicago Tribune.

EDDIE JOHNSON 'WAS INTENTIONALLY DISHONEST WITH ME,' CHICAGO'S MAYOR SAYS

Johnson's remarks come after both the Tribune and the Chicago Sun-Times reported that he was seen having drinks with a woman who wasn’t his wife in the hours leading up to the Oct. 17 incident.

The Chicago Sun-Times reported that Johnson was drinking for hours with a female member of his security detail at a downtown restaurant and the Chicago Tribune  claimed an inspector general’s investigation includes video footage showing the former chief drinking for hours with a woman at a Chicago Board of Trade building restaurant. Both newspapers cited unidentified sources as making the claims.

Chicago police sources told Fox News in late October that Johnson's time as superintendent was expected to suddenly end, either in early retirement or termination, in large part because of what was being referred to as a “drunk driving” incident.

Before he was fired, Johnson was set to retire at the end of the month, after three decades with the Chicago Police Department.

In announcing her decision Monday, Mayor Lightfoot said an inspector general’s report – that hasn’t been released to the public – revealed he misled her and others about the circumstances of that evening and showed “flawed decision-making.”

She declined specifics, citing an ongoing investigation, adding that her decision not to share details was out of deference to his family.

“While at some point the inspector general’s report may become public and those details may be revealed, I don’t feel like it is appropriate or fair to Mr. Johnson’s wife or children to do so at this time,” Lightfoot said at a City Hall news conference.

EDDIE JOHNSON RETIRING AFTER THREE YEARS AT THE HELM

The 59-year-old also has publicly blamed an issue with his medication for the Oct. 17 incident, saying he felt lightheaded while driving home and pulled over and fell asleep. He also told Lightfoot he’d had “a couple of drinks with dinner” earlier that night. Johnson has been hospitalized during his three-year superintendent tenure for a blood clot and a kidney transplant.

“This is not at all how I envisioned the transition but, and I think this is very important, this will not deter the transition,” Beck said Tuesday at a news conference on an illegal gun operation. “You know, Superintendent Johnson and I will talk. We have talked. He has the best interests of the city and CPD at heart as do I.”

He said he and Johnson are friends, but everyone has to be accountable.