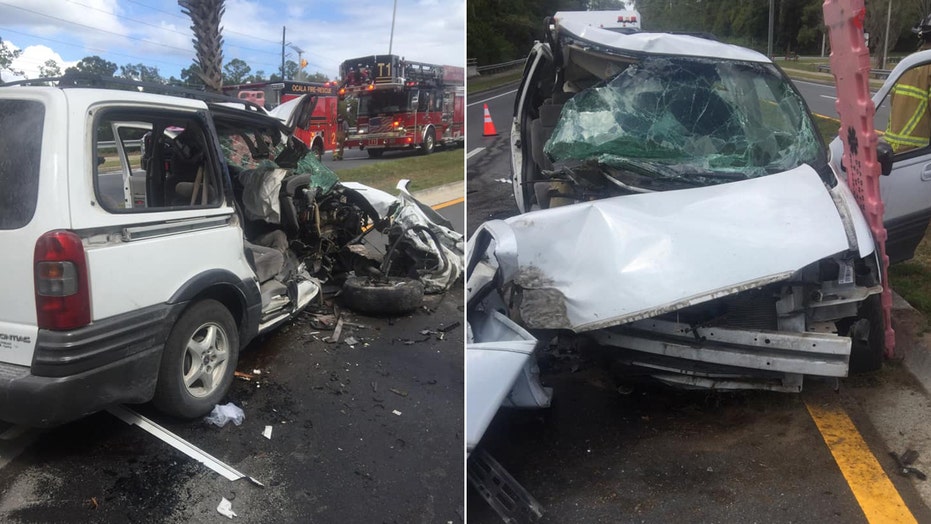 A Florida woman, who accused her husband of placing a “hex” on her, was arrested Wednesday for attempted murder after police say she told her four young children to remove their seat belts before she intentionally crashed her car into a tree -- allegedly in a twisted bid to save them from the "devil."

Calicia Williams, 36, was charged with four counts of attempted murder after investigators say she drove her white Pontiac minivan at a “high rate of speed” onto a grass median and directly into tree, without braking.

Ocala Police responded to the 800 block of SE 31st on Tuesday over reports of single vehicle collision.

Calicia Williams, 36, was charged with four counts of attempted murder after investigators say she drove her white Pontiac minivan at a “high rate of speed” onto a grass median and directly into tree, without breaking.  (Ocala Police Department )

Once on the scene, police found four young children, ages 7 to 13, inside the car wearing no seatbelts. Williams was said to be “making spontaneous utterances” and appeared to be “extremely agitated” when being interviewed by authorities.

According to a police affidavit, she stated that her “husband put a hex on her and caused her to crash.” The responding officer said she kept “rambling on about spells and voodoo.”

Witnesses also told investigators that Williams advised the children to take off their seatbelts before stretching out her hands and saying, “The devil can’t hurt you, he only hurts bad people. You have the light of Jesus in you and only Jesus can cure us.”

Investigators on the scene observed evidence that indicated that Williams did not attempt to brake before crashing into the tree. It also appeared that she directly targeted the passenger side of the vehicle on impact.

Williams also had burns to her neck that indicated she was wearing a seat belt -- unlike her children.

The children and suspect were taken to the hospital but their condition was unknown. Williams will be held without bond following treatment.