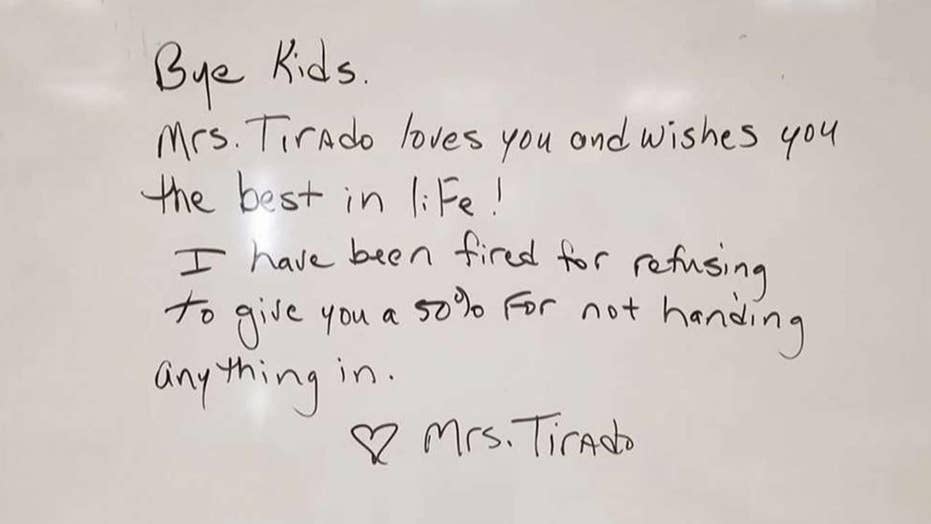 Teacher allegedly fired for refusing to use 'no zero' policy

Florida teacher claims she lost her job after refusing to give students a 50 percent grade for work not handed in.

A Florida history teacher said Monday she was fired for refusing to give half-credit to students who failed to turn in their assignments.

Diane Tirado, 52, said West Gate K-8 School in Port St. Lucie had a “no zero” policy, requiring teachers to give students no less than a 50-percent grade on assignments.

Tirado posted a photo on her Facebook of a note left on a whiteboard to her students saying she was fired. The photo went viral and was shared more than 1,600 times as of Wednesday morning.

“Bye kids. Mrs. Tirado loves you and wishes you the best in life! I have been fired for refusing to give you a 50 percent for not handing anything in,” the message read.

Tirado told WPTV she has been a teacher for 17 years and was hired by the school in August. She said she was terminated on Sept. 14, but no specific cause was given in her termination letter from the principal at the school, since Tirado was still on probation having been recently hired.

She told the station she assigned her students a notebook project and gave them two weeks to complete the work. She said a few students didn’t bring in the assignment, and that's when she learned about the school’s “no zero” policy.

Kerry Padrick, the chief communications officer for St. Lucie Public Schools, told WPTV in a statement Tirado was terminated “shortly after one month of classroom instruction.”

“There is no District or individual school policy prohibiting teachers from recording a grade of zero for work not turned in,” the statement read. “The District’s Uniform Grading System utilizes letter grades A-F, numerical grades 100-0 and grade point averages from 4-0."

In another statement from the district to WPTV, the school denied Tirado’s claims and said she was “released from her duties as an instructor because her performance was deemed sub-standard and her interactions with students, staff, and parents lacked professionalism and created a toxic culture on the school’s campus.”

“During her brief time of employment at West Gate, the school fielded numerous student and parent complaints as well as concerns from colleagues, the statement read. “Based on new information shared with school administrators, an investigation of possible physical abuse is underway.”

Fox News’ request for comment from St. Lucie Public Schools and Tirado was not immediately returned.

Tirado told WPTV she denied “any criminal allegations” and was “looking into suing the district for defamation.”