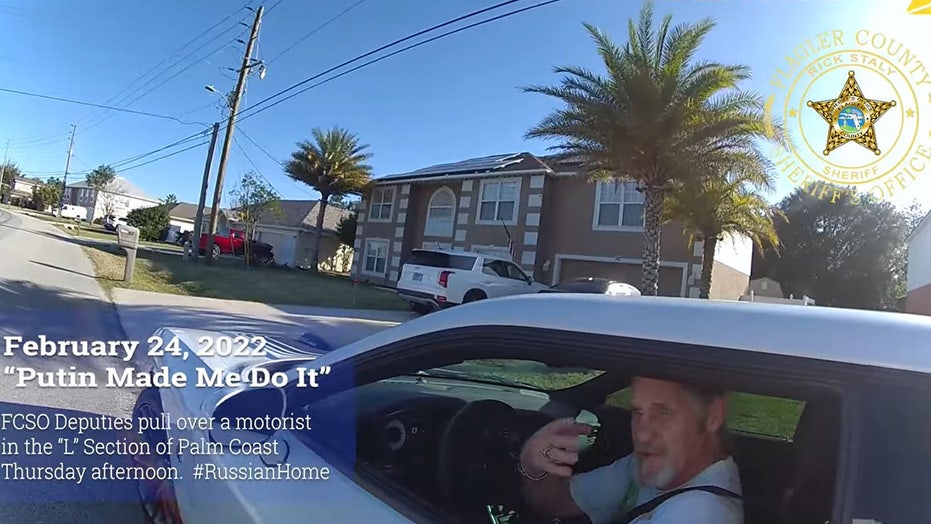 A Florida man, who was pulled over for speeding last week, attempted to place blame on Russian President Vladimir Putin during the traffic stop, authorities said.

The unidentified driver was pulled over by a Flagler County deputy in Palm Coast last Thursday for allegedly running a stop sign and going 50 mph in a 30 mph zone, the deputy said in bodycam footage released by the Flagler County Sheriff’s Office on Tuesday.

According to the footage, the man gave the deputy a myriad of reasons as to why he was spending, including that he had just got the car and was trying to get it out of "sport mode." The man also argued he saw another car coming and was trying to "get out before them."

Soon after, the driver informed the deputy what he said was "the truth," according to the bodycam footage.

"I just found out that Putin just said he’s gonna launch nuclear thermal war against the world, and I was trying to get back to my house to find out what’s going on," the man said. "I'm freaking out."

The traffic stop took place on Feb. 24, the same day that Putin launched an invasion of Ukraine and warned other countries that any attempt to interfere would lead to "consequences you have never seen."

The driver got a ticket for speeding and another one for running a stop sign, Miami's WPLG-TV reported.

A few days after the traffic stop, Putin ordered the Russian defense minister and the chief of the military's General Staff to put the nuclear deterrent forces in a "special regime of combat duty," raising fears that the Ukraine invasion could lead to nuclear war.

"Provocative rhetoric about nuclear weapons is the height of irresponsibility," Secretary of State Antony Blinken told reporters Wednesday in response to a question on whether he thought Putin was "bluffing" as the Russian leader increased the threat level.

"It’s dangerous. It adds to the risk of miscalculation. It needs to be avoided," Blinken said. "We've assessed President Putin's directive and his statements, and at this time, we see no reason to change our own."

Palm Coast is about 60 miles south of Jacksonville.