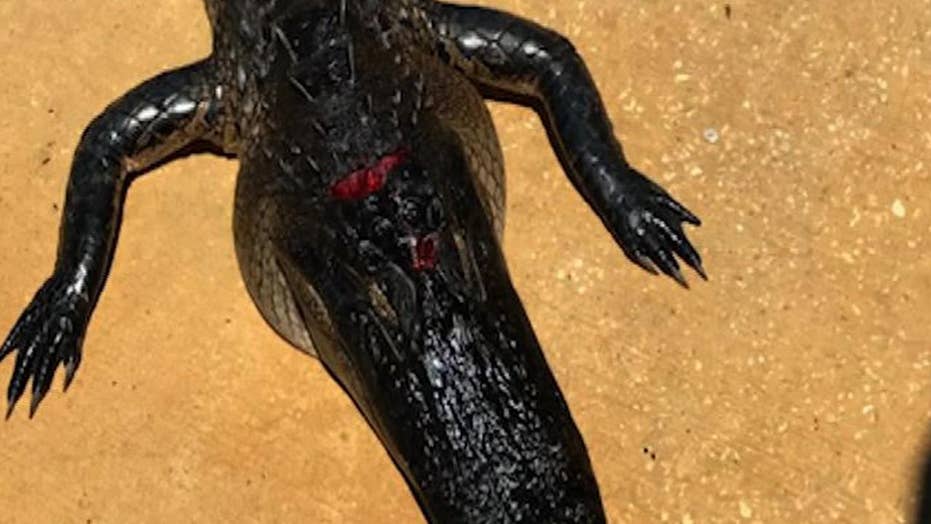 A 10-year-old girl in Florida pried open an alligator’s mouth as it attacked, bit down onto leg at an Orlando-area lake

A young girl’s quick thinking may have saved her life.

The 10-year-old Florida girl who was attacked by an alligator while she sat in shallow water pried open the sharp-toothed reptile’s mouth to set herself free, according to records detailing the frightening encounter.

The girl was in a designated swimming area of an Orlando-area park at about 2:30 p.m. on Saturday. Suddenly, an 8-foot-9-inch alligator lunged at her leg, according to a report by the Florida Fish and Wildlife Conservation Commission. Instead of panicking, she grabbed the gator and pried open its mouth to set her leg free.

The girl was with four family members when the attack occurred, the report said. A lifeguard was on duty.

Officials from Florida Fish and Wildlife were able to find the gator and kill it.

Doctors at a nearby hospital treated and released the girl.

Matt Suedmeyer, manager of the Orange County Parks & Recreation Division, said the waterfront at Moss Park, where the attack happened, will be temporary closed to the public “out of an abundance of caution.”

The attack came almost a year after an alligator killed a 2-year-old boy from Nebraska playing on the beach of a posh Walt Disney resort. Lane Graves was building sandcastles at Disney's Grand Floridian Resort June 14 and Spa when the alligator bit his head and dragged him into a lagoon.

Lane’s father, Matt Graves, who was nearby, grabbed the gator’s snout but was unable to free his son from the reptile’s grip.

There have been 388 alligator bites on people in Florida since 1948, including 24 fatalities, according to the wildlife commission.