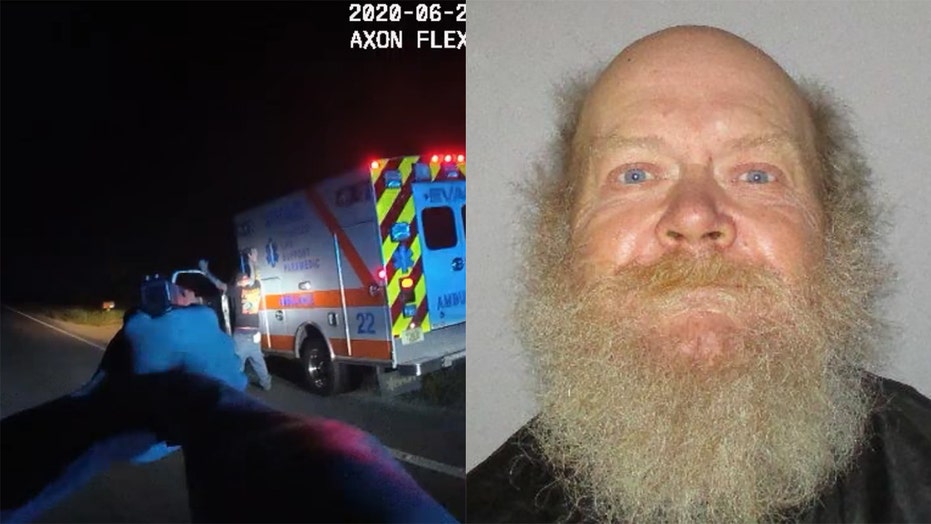 A Florida man suspected of stealing an ambulance from a hospital Tuesday night was chased by police across multiple counties before being pulled over and arrested at gunpoint, authorities said.

Sheriff's deputies in Volusia County, northeast of Orlando, caught up with the suspect, identified as Keith Peacock, 63, of Steinhatchee, after the emergency vehicle was reported stolen from AdventHealth Daytona Beach.

Police video released by the sheriff's office shows deputies taking the suspect into custody during a traffic stop after noticing the ambulance speeding on Highway 11 in Bunnell, Flagler County, FOX 35 of Orlando reported.

"Well this was a first," one deputy is heard saying during the video, after ordering Peacock to the ground. "You don't see that sh-- every day."

The Daytona Beach Police Department received a call around 2:30 a.m. Tuesday in reference to a stolen vehicle at the hospital, according to Orlando's WKMG-TV. A paramedic at the hospital told authorities the suspect had entered an ambulance that was parked outside while she and other crew members were inside, attending to a patient, the report said.

She said the vehicle's back doors were left unlocked because they had just wheeled a patient into the hospital, the station reported. Another crewmember added that earlier, Peacock had asked him for a ride in the ambulance, but they denied his request.

Keith Peacock, 63, was arrested Tuesday after he stole an ambulance from a hospital and was chased by police across multiple counties, authorities say. (Volusia County Sheriff's Office, Flagler County Jail)

Following the incident, Central Dispatch was able to track the emergency vehicle and give updates on its location, the Volusia County Sheriff's Office told FOX 35

Peacock was charged with grand theft of a motor vehicle -- a felony. He was booked into the Flagler County Jail at 5:39 a.m., on a $2,500 bond, according to jail records.