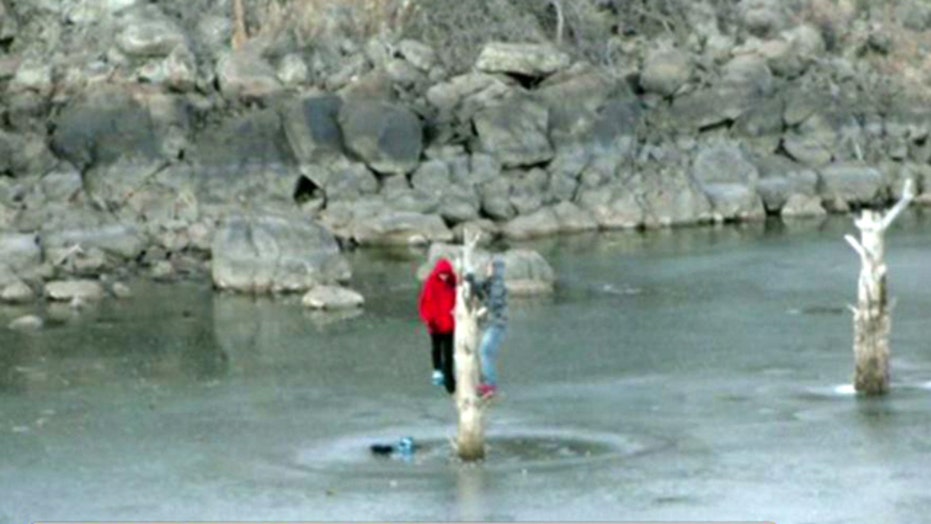 PHOENIX – Two teenagers who clung to a dead tree in a partially frozen Arizona lake for at least four frigid hours after the ice began to crack were rescued by a firefighter in a waterproof suit, authorities said Thursday.

15-year-old Alex Orten and his friend Christian Van Aller were stuck on the tree for four hours Wednesday at the Fools Hollow Lake campground, MyFoxPhoenix.com reports. Alex's 13-year-old brother Wesley Orton had stayed on the bank and used a cell phone to call for help.

"The ice started to crack so the juveniles climbed onto a dead tree that was sticking up through the frozen lake, this was after their shoes had frozen to the ice," said Captain Brent Mix of the Show Low Fire Department told MyFoxPhoenix.com.

Firefighter Jack Gessner crossed the partially frozen lake in the suit with a rope attached to a boat carrying other rescuers. Gessner said he initially crawled atop the ice then had to make his way through the water after he had covered half of the 200 feet and the ice broke.

His suit and training worked as designed, leaving him dry but tired.

"I thought it went well. It was a really good team effort and everybody did their jobs," said Gessner, a firefighter on the ice rescue team of Lakeside Fire District.

Gessner said the boys didn't seem to be panicking, and they were OK as he swam by the tree to reach the shore and get a foothold to hold the rope.

"We were feeling pretty dumb, and we were just scared about how much in trouble we were going to get when we got home," Alex told MyFoxPhoenix.com.

"Every once in a while we have kids trying to see how far out they can go," Mix said. "That was pretty foolish. There was probably an inch of ice in the middle of the lake."

It was 27 degrees when the call for help was made, and 22 degrees by the time the rescue was completed after sunset, Mix said.

Each of the two stranded teenagers lost a shoe that stuck to the ice. Bonnie Van Aller said her son Christian told her he took off one of his shoes when a branch broke and it got soaked in the lake as his foot slipped.

An emergency room nurse married to a sheriff's deputy, Van Aller said she knew it was a serious situation. She left work to go to the lake after her husband called to report the boys' predicament.

She said she watched the rescue and was confident the firefighters had the know-how to save her son. Still, she was thankful about the outcome.

The boys, who wrote thank you letters to the firefighter who saved them, say they want to warn others of the dangers of crossing frozen lakes.

"We could've died, but God was watching over us, he helped us through it," Christian told MyFoxPhoenix.com.