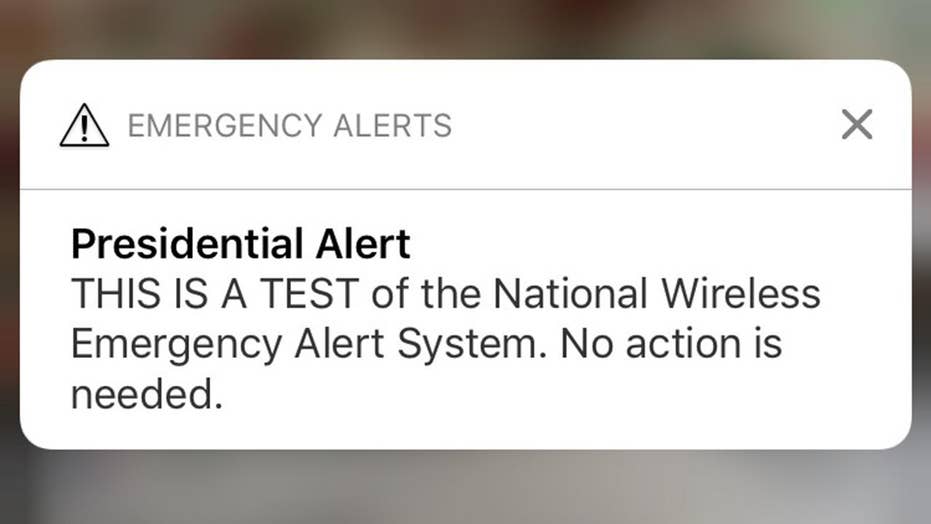 Roughly 225 million electronic devices across the U.S. sounded off at 2:18 p.m. ET for a “Presidential Alert” that read: "THIS IS A TEST of the National Wireless Emergency Alert System. No action is needed."

The alert test, which is FEMA's first for the wireless emergency system -- and is being coordinated with the Federal Communications Commission -- made a sound similar to an Amber Alert or flood watch warning.

The alert will appear as long as the device is on, and may also show up on smartwatches, according to officials.

The Department of Homeland Security posted a reminder about the test on Twitter on Tuesday, and reassured phone users that their numbers are not being shared with anyone.

FEMA officials estimate nearly 75 percent of all mobile phones in the country, including major carriers, will receive the alert. There will also be a television broadcast and radio alert at 2:20 p.m. EDT, which has been tested for several years.

While users can choose not to participate in messages of missing children and natural disasters, they are required to receive presidential alerts, which are sent out at the direction of the White House and activated by FEMA.

Rules outlined in a 2006 law states that the White House can issue a presidential alert only if the public were in peril, or during national emergencies. The alert cannot be a personal message on behalf of the president.

The wireless alert system launched in 2012.

A group of New Yorkers is suing to be able to opt out of the alert, claiming it infringes on their First Amendment rights.