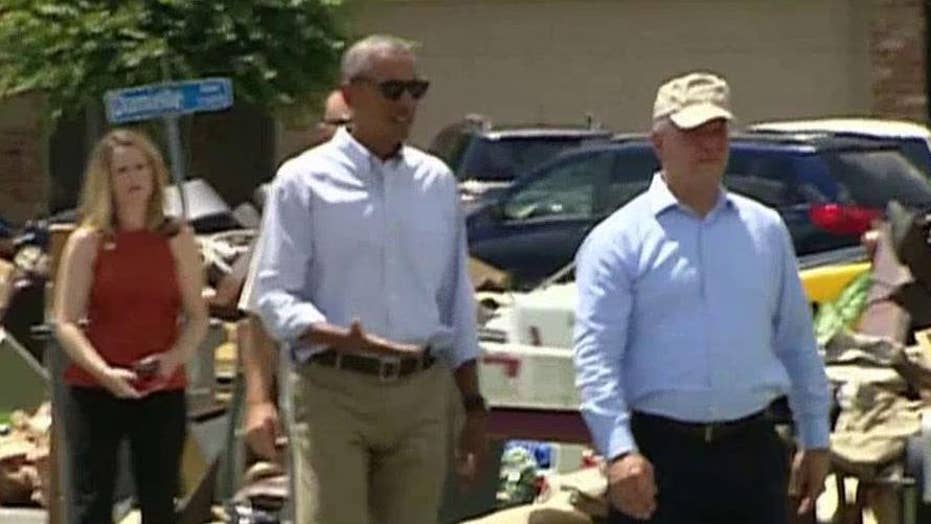 Is Obama's visit to Louisiana too little, too late?

The president's trip to the flood zone was marred by criticism for being long overdue; Kevin Corke reports for 'Special Report'

Meanwhile, nearly 27,000 claims have been filed with the National Flood Insurance Program, and state officials say $37 million in advance payments have been approved for flood insurance policyholders.

The storm that began Aug. 12 dumped as much as 2 feet of water in some areas within 48 hours, causing widespread damage that Gov. John Bel Edwards says affected more than 100,000 homes.

The Louisiana Department of Environmental Quality has issued an emergency order to speed the removal of flood debris. The order allows mattresses, furniture and carpets to be taken to construction and demolition landfills.

Prior to this emergency order, which ends Sept. 30, these materials had to be separated from home debris to be taken to a different type of landfill that accepts household waste and garbage.

The order is in effect for the 20 parishes covered under the emergency declaration.

Department secretary Chuck Carr Brown, who oversaw debris removal during Hurricane Katrina, said in a news release that monitors will watch what  goes into trucks and what gets dropped off at each landfill.

Meanwhile, the National Weather Service says the entire Amite River in Louisiana is now below flood stage and water levels should continue to fall.

Forecaster Fred Zeigler says backwater flooding, which has contributed to widespread flooding, appears to have leveled off and is retreating in some locations of St. John the Baptist, St. James, Ascension, Iberville, East Baton Rouge and Livingston parishes.

Zeigler says the Baton Rouge area could see 1 inch to 3 inches of rain Wednesday afternoon.  He said forecasters would be watching the rainfall rate for a possible flash flood warning. Zeigler said the ground is saturated and the rain will have nowhere to go.