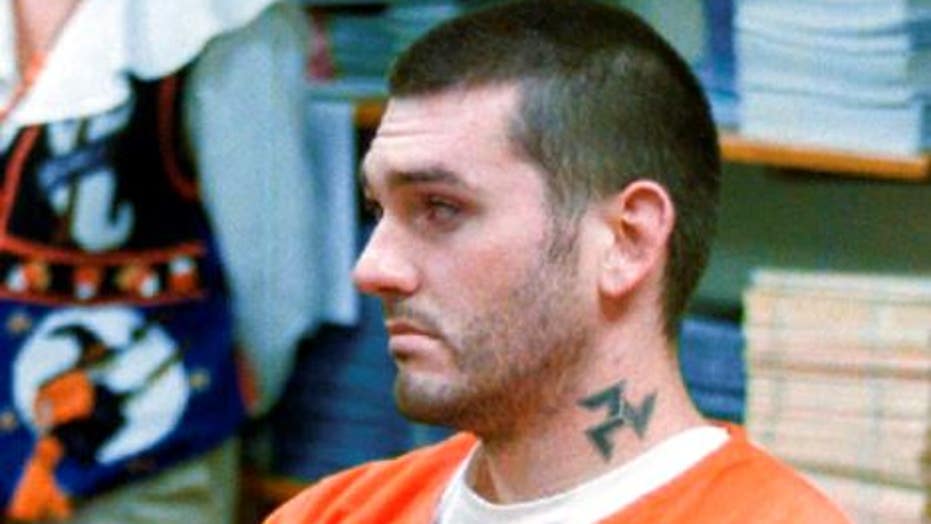 A federal appeals court on Sunday ruled that the first federal execution in nearly two decades can proceed as scheduled on Monday, overturning a lower court order that had delayed the execution over concerns of the coronavirus.

Daniel Lewis Lee, 47, had been scheduled to die by lethal injection on Monday at a federal prison in Indiana for the 1996 killings of a gun dealer, the dealer’s wife and their 8-year-old daughter in Arkansas.

FILE: In this Oct. 31 1997 file photo Danny Lee waits for his arraignment hearing for murder in the Pope County Detention Center in Russellville, Ark.  (The Courier via AP)

Chief District Judge Jane Magnus-Stinson ruled Friday in Indiana that the execution would be delayed because of concerns from the victims’ family about the coronavirus pandemic.

The Justice Department (DOJ) argued that the judge’s order misconstrued the law and asked the appeals court to immediately overturn the ruling.

The appeals court found that the claim from the victims’ family “lacks any arguable legal basis and is therefore frivolous."

The Justice Department also argued that while the Bureau of Prisons (BOP) has taken measures to accommodate the family and implemented additional safety protocols because of the pandemic, the family’s concerns “do not outweigh the public interest in finally carrying out the lawfully imposed sentence in this case.”

The appeal came after a BOP staff member involved in preparing for the execution tested positive for the coronavirus. However, the Justice Department said the development would not mean an additional delay in the government’s timetable because the worker had not been in the execution chamber and had not come into contact with anyone on the specialized team sent to the prison to handle the execution.

FILE: In this June 11, 2001 file photo, an aerial view of the execution facility at the United States Penitentiary in Terre Haute, Ind., is shown.  (AP)

The relatives would be traveling thousands of miles and witnessing the execution in a small room where the social distancing recommended to prevent the virus’ spread is virtually impossible. There are currently four confirmed coronavirus cases among inmates at the Terre Haute prison, according to federal statistics, and one inmate there has died.

The victims’ family had argued they weren’t trying to overturn Lee’s death sentence but instead they “seek to exercise their lawful rights to attend the execution of Lee, so that they can be together at that moment in time as they grieve their losses,” according to the filing.

The family says they will appeal to the Supreme Court because the government is supposedly forcing them to compromise their safety by scheduling Lee’s execution in the midst of the pandemic.

Still, the family hopes there won’t ever be an execution. They have asked the Justice Department and President Trump not to move forward with the execution and have long asked that Lee be given a life sentence instead.

The relatives, including Earlene Branch Peterson, who lost her daughter and granddaughter in the killing, have argued that their grief is compounded by the push to execute Lee in the middle of a pandemic. Peterson, who is 81 and has not left the county where she lives since February, was told by her doctor she should not travel and should avoid contact with others as much as possible to during the pandemic, the filing said.

“Plaintiffs face the unacceptable choice between exercising their right to witness the execution and risking exposure to a deadly disease,” the family’s lawyers wrote in an appeals court filing on Saturday.