The FBI is asking for the public’s help identifying an unknown woman who appears in a video ordering a child victim to "stand up" repeatedly in a sex trafficking probe.

"The FBI needs your help to identify Jane Doe 46," the bureau said in a statement Wednesday. "She's believed to potentially have critical information about the identity of a child victim in a sexual exploitation investigation."

Investigators say they believe the video was created in May of this year. It shows the woman’s hand and arm. She is described as "a White female with a distinctive tattoo on her left wrist."

The video, which has not been made public, did not reveal her face, according to authorities.

She is also seen wearing a wedding ring, and investigators released additional background images showing the interior of a room with brown floors, a broom and a few pieces of furniture. There are metal grates leaning against a door and a wall, as well as a yellow blanket and light-colored pillow on the floor.

She can be heard speaking in English, according to investigators.

GALLERY OF SCREENGRABS FROM THE VIDEO:

Investigators shared an audio sample of the woman’s voice.

She can be heard ordering the child to "stand up," as another woman’s voice is heard in the background.

LISTEN TO A SAMPLE OF JANE DOE 46'S VOICE: 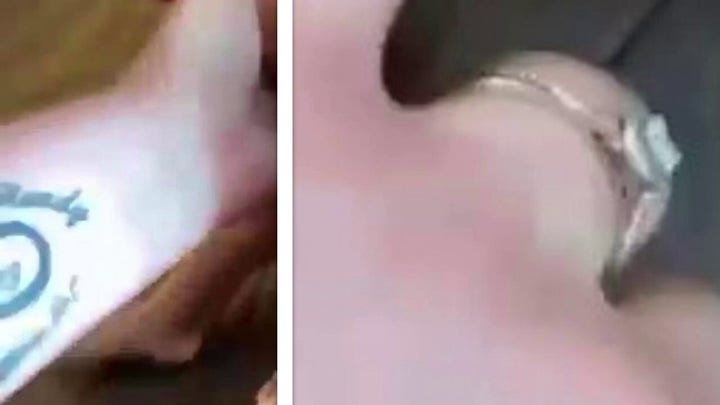 She repeats the command a moment later, louder.