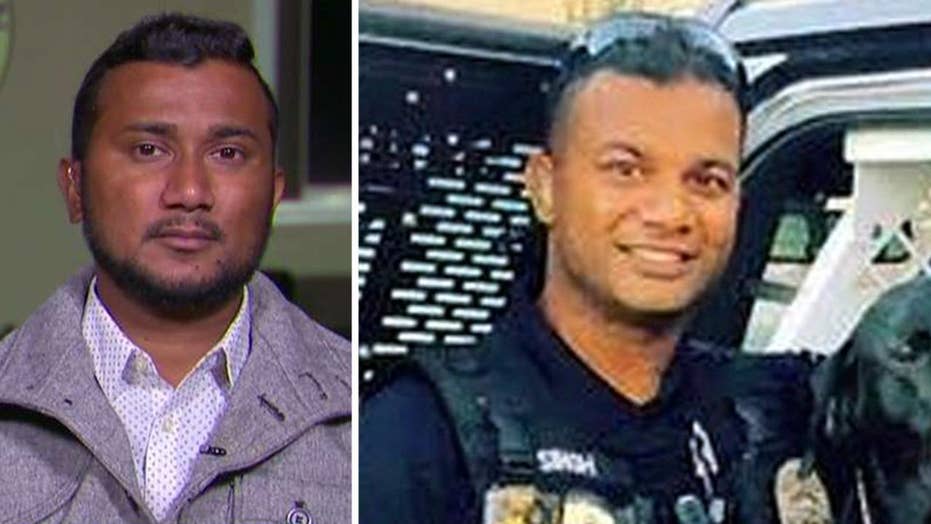 Cpl. Ronil Singh's brother Reggie Singh and Newman Police Chief Randy Richardson speak out on how the family is coping after the police officer's death at the hands of an illegal immigrant. Meanwhile, the Tunnel to Towers Foundation is coming to the aid of Singh's wife and baby son, raising money to pay off their mortgage.

The brother of a California police officer who was allegedly killed by an illegal immigrant the day after Christmas told Fox News his widow had a “good conversation” with President Trump as the family continues to grieve.

Reggie Singh appeared on ‘Fox & Friends’ Friday as the family of Newman Police Cpl. Ronil Singh shared a new video of the fallen officer playing with his five-month-old son before his death.

“He was waiting for the son to talk, walk. It just breaks my heart he will never be able to see that,” Singh said.

The Stephen Siller Tunnels to Towers Foundation is now trying to raise enough money to pay off the family’s $300,000 mortgage. Its chairman and CEO said Friday on ‘Fox & Friends’ that they are just $50,000 short.

“They came here to live the American dream,” Frank Siller said. “Let’s show them the greatness of America and let’s take care of this family."

Reggie Singh described the fundraising effort as a “huge relief.

“Unfortunately bills still need to be paid and this means a lot to Ron and his family,” he said.

The illegal immigrant suspected of killing Singh -- Gustavo Perez Arriaga – has had his case delayed until he undergoes a mental health evaluation. He is set to return to court early next month.

The incident has generated fresh criticism of California’s sanctuary laws, which put limits on communication between police and Immigration and Customs Enforcement agents.

“We are being handcuffed by policies and laws and this was a preventable tragedy,” Newman Police Chief Randy Richardson told ‘Fox & Friends’ on Friday. “If we were able to turn this suspected killer over to immigration we wouldn’t be sitting and having this interview right now.”

"You'll see vast numbers of vehicles driving through the desert and entering where you don’t have a very powerful fence or a wall," he said. "A wonderful young police officer, I spoke to his wife yesterday, where he was shot, viciously shot for simply stopping a person that came over the border illegally. Got shot, killed and took the most beautiful picture just hours before, [a] Christmas picture. We don't want that happening."