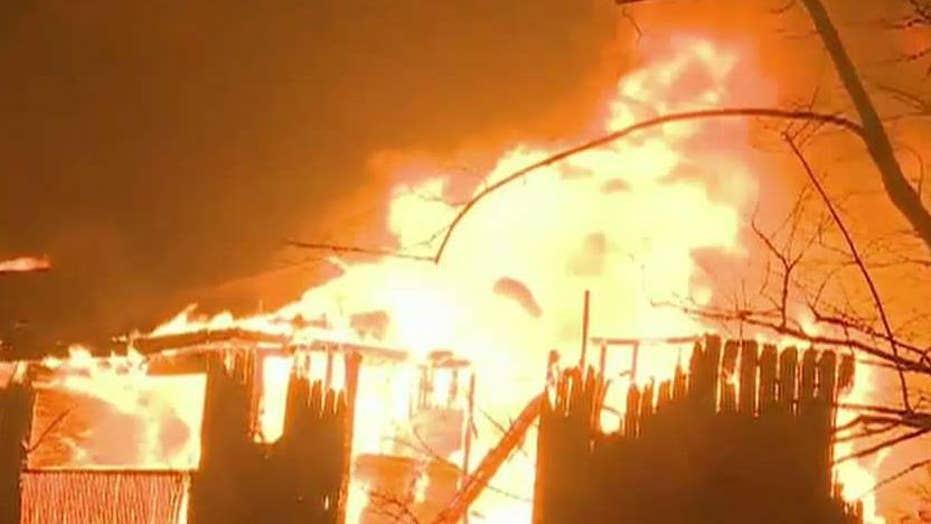 GATLINBURG, Tenn. – People in cars and trucks rolled into the wildfire-ravaged city of Gatlinburg on Friday to get a first look at what remains of their homes and businesses, and a mayor raised the death toll to 13, including a person who appeared to die of a heart attack while fleeing the flames.

"I can't describe to you the feelings we have over this tragedy," he said during a news conference with the governor and U.S. senators.

The charred foundation is all that remains of a home in the Cobbly Knob area of Pigeon Forge, Tenn., on Thursday. (Amy Smotherman Burgess/Knoxville News Sentinel via AP)

Local officials, bowing to pressure from frustrated property owners, said they would allow people back into most parts of the city Friday morning. Residents have to pass through a checkpoint and must show some proof of ownership or residency, Gatlinburg City Manager Cindy Cameron Ogle said.

DOWNPOURS TO RAISE FLASH FLOOD RISK FROM TEXAS TO ALABAMA

"The city is not implying that private property is safe," she said. "People may encounter downed powerlines or other hazards."

Among those anxiously waiting to return was Tracy Mayberry. He and his wife, 12-year-old son and five dogs have bounced between hotels since they were forced to evacuate their rental home Monday night. They were struggling to find a place to stay Thursday as many lodges began to discontinue the special rates for evacuees.

"It feels like Gatlinburg is more worried about how to rebuild than they are about their people," he said.

In nearby communities, there were signs of normalcy. In Pigeon Forge, the Comedy House rented an electronic billboard message that said it was open. A hotel flyer urged guests to check out the scenic Cades Cove loop: "Take a drive and remember what you love about the Smokies!"

Dollywood, the amusement park named after Parton, will reopen Friday afternoon after it was spared any damage.

The Associated Press was allowed access into the Great Smoky Mountains National Park on Thursday. A forest of bare trees standing amid a scorched landscape could be seen along with fire crews sawing up a tree stump.

In Gatlinburg, the center of the devastation, officials there hope to open the city's main roads to the public by Wednesday.

Authorities searching the charred remains of homes and businesses said they expected to finish by nightfall Friday.

Despite recent heavy rains, fire officials warned people shouldn't have a false sense of security because months of drought have left the ground bone-dry. Wildfires can rekindle, they said.

The trouble began Monday when a wildfire, likely caused by a person, spread from the Great Smoky Mountains National Park into the Gatlinburg area as hurricane-force winds toppled trees and power lines, blowing embers in all directions.

More than 14,000 residents and visitors in Gatlinburg were forced to evacuate, and the typically bustling tourist city has been shuttered ever since.

Great Smoky Mountains National Park Superintendent Cassius Cash has said the fires were "likely to be human-caused" but he has refused to elaborate, saying only that the investigation continues. Agents from the Bureau of Alcohol, Tobacco, Firearms and Explosives are helping investigate the cause.