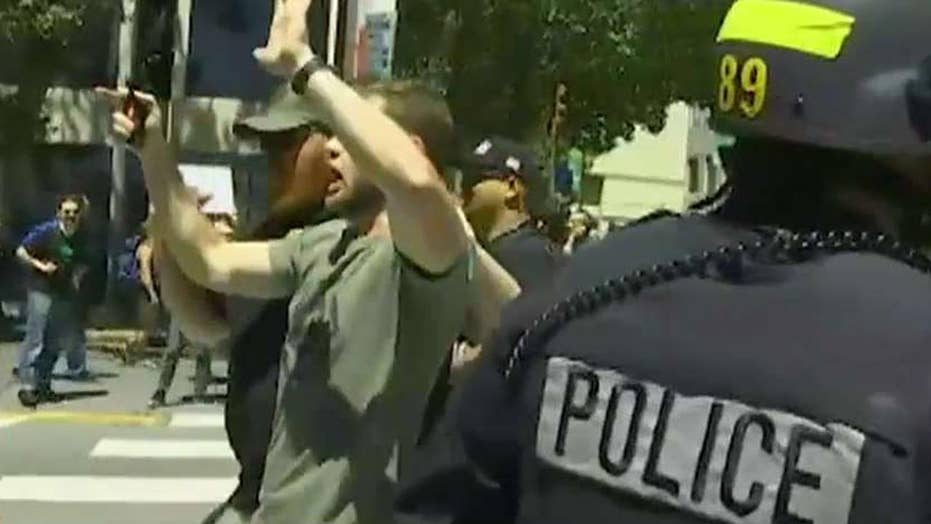 A former community college professor and anti-fascist activist as part of a plea agreement pleaded no contest to misdemeanor assault for allegedly hitting supporters of President Trump with a bike lock at a political rally in Berkeley last year.

Eric Clanton, 29, agreed to the deal on Wednesday in the Alameda County Superior Court, his attorney Daniel Siegal said. He was sentenced to three years of probation, which will end on Aug. 8, 2021, Berkleyside.com reported.

The Alameda County district attorney's office initially charged Clanton with felonies for hitting several pro-Trump demonstrators on the head with a bicycle lock during a “free the speech” demonstration in Civic Center Park in Berkeley on April 15, 2017. The attack was captured on camera and posted on YouTube.

OKLAHOMA MAN GUILTY OF KILLING 5 MEMBERS GETS LIFE IN PRISON

Siegel said medical records showed only one alleged victim sought medical treatment, for a bruise smaller than a dime.

Investigators said they “recovered U-locks, sunglasses, a glove, jeans, and facial coverings consistent with items worn during the April 15 assaults,” the website reported, citing court documents. A camera at the residence also contained “selfies” taken by Clanton which showed him “wearing black clothing and facial coverings” similar to the person in the YouTube video. Phone records also showed Clanton was near the park on April 15, 2017.

Police also found photos of Clanton “posing next to Anarchy symbols” and he was documented as having an “Iron Front” tattoo which is “associated with Anti-Fascists,” court documents stated.

Clanton taught at the Diablo Valley College in 2015 and 2016. He has been arrested in connection with other demonstrations, police said. He was arrested in 2014 during a Black Lives Matter protest on “suspicion of committing a public nuisance” and “willfully and maliciously” blocking a street, sidewalk or other public places,” police said.