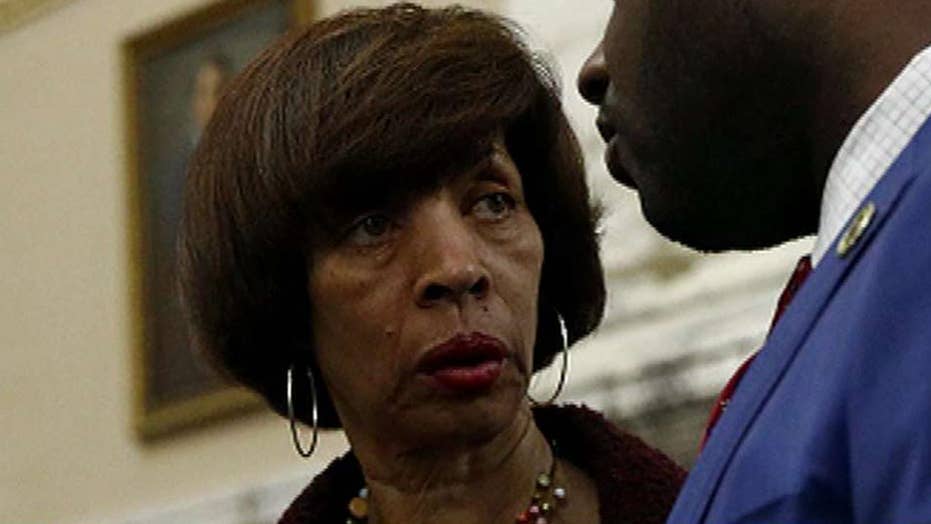 Attorney Steven Silverman reads a written statement from embattled Baltimore Mayor Catherine Pugh, who faced investigation into payments she received for the self-published children's book series that she sold to companies with business before the city.

Baltimore's former Mayor Catherine Pugh, who is accused of running a multiyear scam using her self-published children's book to boost her political career and pad her coffers, pleaded guilty Thursday before a federal judge to conspiracy and tax evasion charges.

Pugh stood before U.S. District Judge Deborah Chasanow and said she understood the sweeping allegations against her as well as the possibility she could spend some time in jail, The Baltimore Sun reported.

Specifically, Pugh pleaded guilty to conspiracy to commit wire fraud, conspiracy to defraud the United States and two counts of tax evasion. The four counts collectively carried a maximum sentence of decades behind bars, though she could be sentenced to less time.

She did not plead guilty to seven individual counts of wire fraud.

Prosecutors said Pugh's plan to rip off nonprofits and taxpayers began in 2011, when she was a state senator.

In an 11-count federal indictment unsealed Wednesday, the government claimed Pugh arranged fraudulent sales of her "Healthy Holly" book to schools, libraries and a medical system to pay for her mayoral bid as well as to buy and renovate a house in Baltimore City.

"There are many victims in this case," U.S. Attorney Robert Hur said when announcing the indictment. "The victims are all of us, the taxpayers and the people of Baltimore, who expect and deserve integrity from their public officials."

The Pugh saga put Baltimore back on the map as a city ripe with corruption. Pugh's "Healthy Holly" book scandal consumed Maryland's largest city, which has been facing problems including a soaring crime rate ans illegal drugs. Pugh was the third Baltimore mayor to face sustained calls to resign.

In early April, Pugh took a leave of absence from the mayor's office. Her break was blamed on poor health following a bout of pneumonia, and her lawyers described the 69-year-old as too fragile – mentally and physically – to make any "major decisions." She stayed holed up in her three-story home for nearly a month. Frustrated residents and even some members of her own party grew weary of her open-ended retreat and demanded she either step up or step aside.

Soon thereafter, FBI and IRS agents raided Pugh's offices, homes and other locations, seizing money-transfer receipts, a laptop, compact discs and a $100,000 check from the University of Maryland Medical System.

Pugh's books have included "Healthy Holly: Exercising is Fun" and "Healthy Holly: Fruits Come in Colors like the Rainbow." Most were sold directly to nonprofits and foundations that did – or tried to do – business with the state or with Baltimore.

When Pugh finally resigned on May 2, Silverman read a statement from the first-term mayor that said she was "sorry for the harm I have caused to the image of the city of Baltimore and to the credibility of the office of the mayor. Baltimore deserves a mayor who can move our great city forward."

Pugh's books include "Healthy Holly: Exercising is Fun" and "Healthy Holly: Fruits Come in Colors like the Rainbow." Most were sold directly to nonprofits and foundations that did – or tried to do – business with the state or city of Baltimore.  (AP, File)

Brown, an aide to Pugh in the state Senate and during her 2016 campaign, helped hawk Pugh's book, often calling himself Healthy Holly's CEO even though he was never an employee. Wedington, who worked with Brown and directed a job training center Pugh chaired, "unfortunately" made some wrong decisions to help pay her medical bills, her lawyer Brandon Mead said.

Pugh started serving in the state legislature in 2005. As a state senator, she sat on a committee that funded the University of Maryland Medical System, one of the state's largest private employers. She also sat on the hospital network's board starting in 2001 until the scandal erupted in March.

The medical system paid Pugh $500,000 for 100,000 copies of her books, but there was no contract, and the system described some of the purchases as "grants" in federal filings. She returned her most recent $100,000 payment and described the deal as a "regrettable mistake."

Health care provider Kaiser Permanente also disclosed that it had paid Pugh's Healthy Holly LLC about $114,000 between 2015 and 2018 for about 20,000 copies. Pugh oversaw Baltimore's spending board in 2017, when the city awarded a $48 million contract to the Kaiser Foundation Health Plan for the Mid-Atlantic States Inc.

Hur described the allegations as a years-long "ruse" involving "funny documents" that included faked federal tax forms and invoices, and companies that did no actual work.

Asked whether he viewed the buyers of Pugh's book as victims or co-conspirators, Hur said people could "rest assured that we are continuing to look at all the potential criminal charges that could be brought."

Jennifer Boone, the special agent in charge of the FBI's Baltimore Field Office, said the nearly three-year investigation illustrated that "no one is above the law."

"There is a growing intolerance by the American people of public corruption, an intolerance reflected in the willingness to come forward and report abuse of public office," she said.