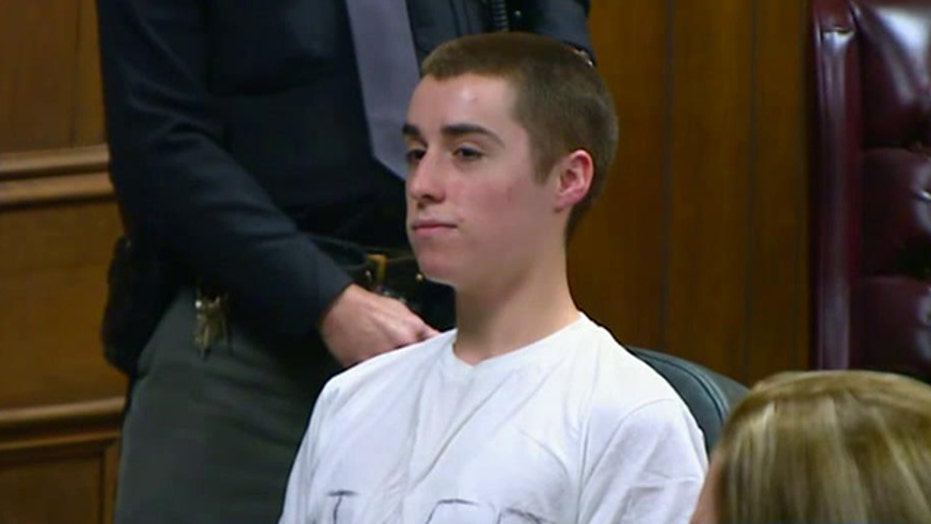 A teenager convicted of killing three students at an Ohio high school scrambled over a fence to escape a state prison with two other prisoners and was captured nearly six hours later hiding near a church, authorities said.

T.J. Lane, 19, was caught only about 100 yards from the prison by two state troopers at 1:20 a.m. Friday. A second prisoner had been caught almost immediately after the Thursday night escape, and troopers apprehended the third three hours after finding Lane.

Lane's brief taste of freedom frightened residents in Chardon, the community nearly 200 miles to the east where Lane fatally shot three students and wounded two others and then further angered people with defiant behavior in court. At his sentencing hearing last year, Lane unbuttoned a dress shirt to reveal a T-shirt scrawled with the word "killer," similar to a shirt he wore during the shootings on Feb. 27, 2012. He cursed and made an obscene gesture as the judge gave him three consecutive life sentences.

Police officers were sent late Thursday to guard the homes of the families of Lane's victims. School officials canceled classes Friday and made counseling available for students and the larger community.

"It's a trigger," district spokeswoman Ellen Ondrey said of the escape. "It takes everyone back to 2/27 and what was happening that day."

The escape occurred at Allen Oakwood Correctional Institution, a minimum- and medium-security prison in Lima about 80 miles south of Toledo.

Lane was housed on a "protective control" unit, a higher security setting than the main compound, according to a legislative prisons oversight committee statement Friday. The unit is designed to hold inmates with proven safety threats because of the notoriety of their crimes, testimony they have given or gang threats, the committee said.

An April inspection by the committee noted ongoing security concerns at the unit. Security management "remains a concern, both in terms of how the higher security inmates are handled, as well as discipline for misconduct," according to a May report by the Correctional Institution Inspection Committee. A message was left Friday with the state prisons agency.

Warden Kevin Jones said he saw Lane after he was captured and that the teen did not say anything. An investigation is underway to determine how the men, who were outside for recreation, managed to climb over the perimeter fence, the warden said.

Authorities wouldn't say whether the three prisoners planned their escapes together.

The union representing Ohio prison guards, the Ohio Civil Service Employees Association, said Friday that prison officials were warned about an escape a day before they broke free and those officials did not take any additional steps to secure the unit. The union told The Associated Press that security jobs were cut at the prison about five years ago.

Lane was captured somewhere near a small church and cemetery that are separated from the prison by an overgrown field and a two-lane road.

Russ Hill, who has lived next to the church for two decades, said deputies alerted him about the escape and he spent the next six hours sitting in house in the dark with a gun at his side as dozens of officers searched the area with flashlights and spotlights.

"I've never felt safer any night I've been here because there were cops all over," he said. "But I wasn't about to go to sleep."

Authorities didn't release information about the prisoner who was caught almost immediately.

Authorities confirmed the third prisoner was taken into custody around 4:20 a.m. Friday but didn't immediately release how or where. That prisoner was identified as 45-year-old Clifford Opperud, who was serving time for robbery, burglary and kidnapping.

Lane pleaded guilty last year to aggravated murder charges in the shootings at Chardon High School. He said he didn't know why he shot the teens.

Prosecutors say Lane took a .22-caliber pistol to school and fired 10 shots, killing Daniel Parmertor and Demetrius Hewlin, both 16, and Russell King Jr., 17, while wounding two others. One of the wounded students is paralyzed.

Lane, who was 17 at the time, was waiting in the cafeteria for a bus to take him to an alternative school for students who don't fare well in traditional settings.

At his sentencing, Lane was defiant, smiling and smirking throughout, including while four relatives of the victims spoke.

Reached Thursday at her home in Chardon, Parmertor's mother, Dina, said she was disgusted that Lane had escaped.

"I'm extremely scared and panic stricken," she said. "I can't believe it."

The escape marks the second time in about a year that the prisons department faces scrutiny over the handling of a notorious prisoner. Ariel Castro, who held three women captive in his Cleveland home for about a decade, was found dead kneeling in his cell and hanging from a sheet last September in what authorities concluded was a suicide.