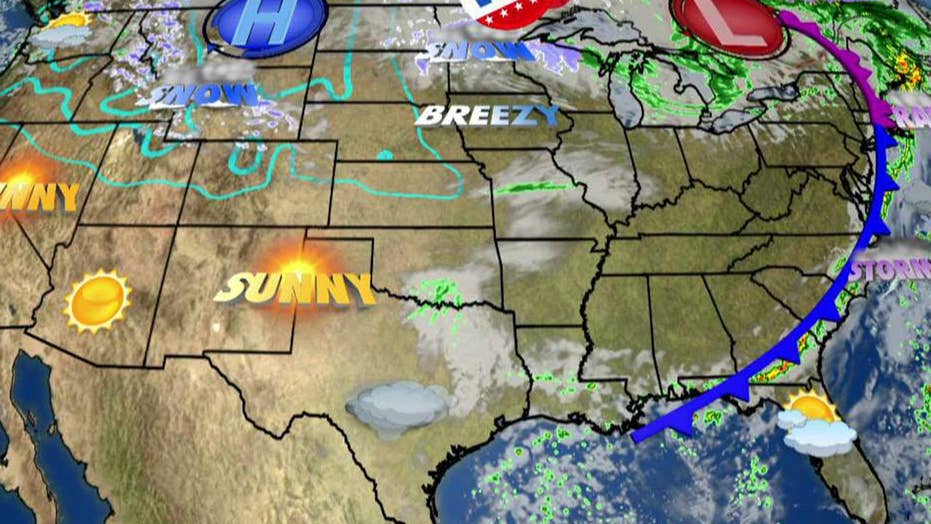 Janice Dean has your Election Day FoxCast from Fox Square.

A storm system blamed for at least one death in Tennessee is charging east Tuesday -- just as millions of Americans head to the polls to cast their votes in the midterm elections.

One woman was killed and two others were injured after a possible tornado tore through Rutherford County late Monday.

Officials told FOX17 the woman died when a home collapsed in Christiana, located about 40 miles southeast of Nashville. Two other women were transported to a hospital after another home collapse was reported.

A family was forced to flee their home in the same town after a lightning strike ignited a fire. At least 1,500 customers were reported to be without power in the area, and officials urged drivers to stay off the roads until at least noon, when conditions are expected to improve.

At an early-morning news conference, officials said that they do not believe that polling locations are damaged in Tennessee or will be impacted by the storms, FOX17 reported. The state is in the midst of a slugfest between Senate hopefuls Marsha Blackburn, a Republican, and Phil Bredesen, a Democrat.

The reported tornado was one of several reported across middle Tennessee on Monday. There were also several reports of wind damage across the region.

The system that spawned the violent storms is now pushing out of the Tennessee River Valley and across Alabama and Georgia, according to Fox News Senior Meteorologist Janice Dean. The cold front is also bringing rain stretching into the Northeast.

"Thankfully the severe weather threat will weaken through the day, but a few strong storms are possible from the Southeast to the Mid-Atlantic as a cold front approaches," Dean said Tuesday. "This front will clear much of the Northeast and Mid-Atlantic by the early evening, but the East Coast will be unsettled for much of Tuesday."

How could weather impact voters?

Certain types of weather can be shown to have an impact on some voters in deciding whether or not to head to the polls, according to research compiled by AccuWeather.

The forecast for Election Day across the nation. (Fox News)

Loftus said that researchers at AccuWeather used L2 as a resource for historical voter data, in addition to proprietary historical weather data which comprises of nearly 300 weather parameters, in order to examine how weather influences voter turnout in each state.

The election day forecast in key states across the U.S. (Fox News)

In Tennessee, for example, cool and damp weather has been found to deter voters from heading to the polls.

"The heaviest rain and storms should be out of the state on Tuesday which will be good news for voters," Loftus said. "However, any localized areas recovering from the severe weather just prior to Election Day may see less in the way of voter turnout as residents will likely focus on clean up and power restoration efforts."

In Georgia, storms could impact likely voters, especially "weather-sensitive" groups that include African Americans, 18–24-year-olds, and those 65 and older. Similar rainy conditions are expected in Michigan, which could depress the numbers of the same subgroups.

The threat for severe weather spans from the Southeast to the Mid-Atlantic.

In New Jersey, which has a tight Senate race between Democratic Sen. Robert Menendez and Republican challenger Bob Hugin, heavy rain may make things "quite interesting," according to Loftus. Republicans tend to fare better in the Garden State, compared to Democrats, when heavy rain occurs, as opposed to when the weather is nice.

"Historical trends indicate that Republicans will have the weather-advantage as heavy rain and storms are expected," he told Fox News.

In Florida, the site of key Senate and Gubernatorial battles, lower turnout tends to occur when it's warm and muggy, as expected Tuesday. But voters in the 18-to-24-year-old range usually vote on Election Day if there is more sunshine, according to Loftus. The only parts of Florida that should see cloudy or rainy weather will be in parts of the Panhandle region.

The forecast for rainfall on Election Day across the East Coast.

In terms of how weather impacts voters of certain political affiliations, Loftus said that all depends on the state.

"For example, in Nebraska, rain deters Republicans more so than Democrats, however, I will say, for the majority of our models that we have tested, there is strong statistical significance that Republicans fare better during wet weather," he told Fox News. Loftus added that West Virginia, Rhode Island, Arizona, Indiana, and New Jersey are among the "few" states where this also occurs.