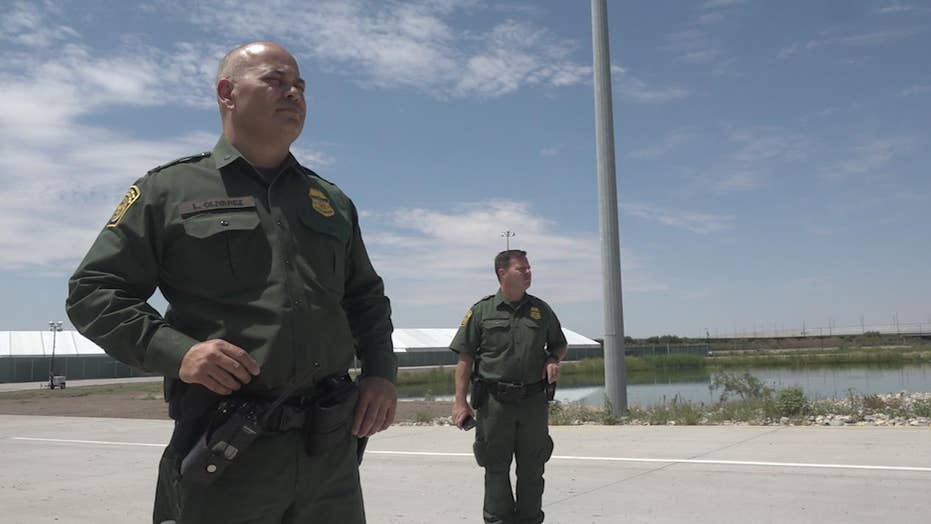 Department of Homeland Security funded temporary holding facilities to house up to 2,500 single adults at the Tornillo Port of Entry.

EL PASO, Texas — As an influx of migrants apprehended at the border has triggered serious overcrowding, U.S. officials this week unveiled a “temporary” solution -- a new migrant holding facility for single adults at the Tornillo Port of Entry in Texas.

“I want you all to know how appreciative every single Border Patrol agent is of the work that has been done at our national level to support us out here in the field,” Chavez said. “It couldn’t have been done without the engagement of the acting secretary, the acting commissioner, and our chief, Carla Provost. Every day, they’re hearing us. They are listening to us, and they are pushing for the resources to come to our aid because we are in dire need in the field during this crisis situation.”

For Chavez, the facilities' “number one priority" is care. She said the temporary holding facilities were designed to house apprehended migrants for a short period of time with a goal to move them out in 72 hours or less. The migrants are to be provided with three meals a day — two hot meals for breakfast and dinner, a cold lunch, and access to snacks if wanted, Chavez said, adding that they'd have access to medical care, restrooms, showers and laundry.

The treatment of detained migrants at many border facilities has sparked controversy.

The Border Network for Human Rights had a community event Thursday morning in front of El Paso’s Border Patrol headquarters to let McAleenan and Morgan know they weren’t welcome in El Paso “given (their) anti-immigrant agenda.”

Bedding and other items are seen in a new migrant holding facility at the Tornillo Port of Entry in Texas. (Charlie Lapastora/Fox News)

The new facilities were split up into 20 “pods,” fenced-in areas where migrants are to be given sleeping bags and benches, with Border Patrol agents and the Texas National Guard keeping an eye on the areas.

Migrants rest in the new migrant holding facility at the Tornillo Port of Entry in Texas. (Charlie Lapastora/Fox News)

“We needed this funding,” McAleenan said. “Without Mexico’s efforts, without the efforts the government of Guatemala is undertaking, that we’re expanding now into El Salvador and Honduras, we’re going to see a continued flow based on those fundamental gaps and our immigration laws that still exist. So, we need this capacity to be ready for any changes in this flow.”

Some of the interior at a new migrant holding facility at the Tornillo Port of Entry in Texas. (Charlie Lapastora/Fox News)

In El Paso, as of July in fiscal year 2019, there has been a 137 percent increase of single adult apprehensions compared to the same timeframe last fiscal year (27,172 compared to 11,451). That was the biggest change in all of the southwest border sections.

“It wasn’t just a few weeks ago, we were (at) 19,000 in our detention facilities. Our capacity is about 4,500. They were overcrowded across the southwest border,” Morgan said. “And, we agree, it was the hardworking men and women of CBP and all our DHS partners who came together to put this together to alleviate that overcrowding.”

It took approximately 45 days to complete the new facility, according to Border Patrol, and it started operations on Tuesday. In the two days it's been open, it's housed 32 migrants so far, but its capacity is 2,500 adults.

“Our community is still badly wounded (from the shooting at Walmart on Aug. 3), grieving, trying to heal, and this is a process that will likely go on for some time,” the Border Network for Human Rights said in a statement.

“We were targeted because of our skin color and our language, because our values welcome the stranger, because we are where America meets the world — producing new, different, often beautiful things that make us rethink who we are and what it means to be American. Secretary McAleenan has been part of the problem. His agencies have dehumanized and abused migrants, forcing them into subhuman conditions without accountability or oversight. His rhetoric has distorted the reality of asylum seekers, telling Americans lies in the hope we will turn our backs on our values. And, the week after the shooting, as El Paso still mourned, immigrant communities trembled in fear, and Americans wondered what their government would do in response to the threat of radical right-wing white supremacist terrorism, Kevin McAleenan, as head of DHS, directed the largest workplace immigration raids in more than a decade.  All of these actions show an utter disregard for the El Paso community, for the needs of immigrants and communities of color, for America’s history and values.”

Overcrowding numbers have been down from a peak in early June, but Morgan emphasized on more than one occasion on the tour that this was a temporary solution — and CBP needs more action on the national level.

“(It’s) not just a United States immigration crisis but really a regional crisis shared by the United States, the government of Mexico, and the Northern Triangle countries,” Morgan said. “This is not a durable, sustainable solution. We still need Congress to act.”

“The crisis is not over,” Chavez added. “And, everyday I am worried that we’re going to go right back to it next week or tomorrow. But, that’s OK because now we’re better prepared, as you can see with the facility of this size.”