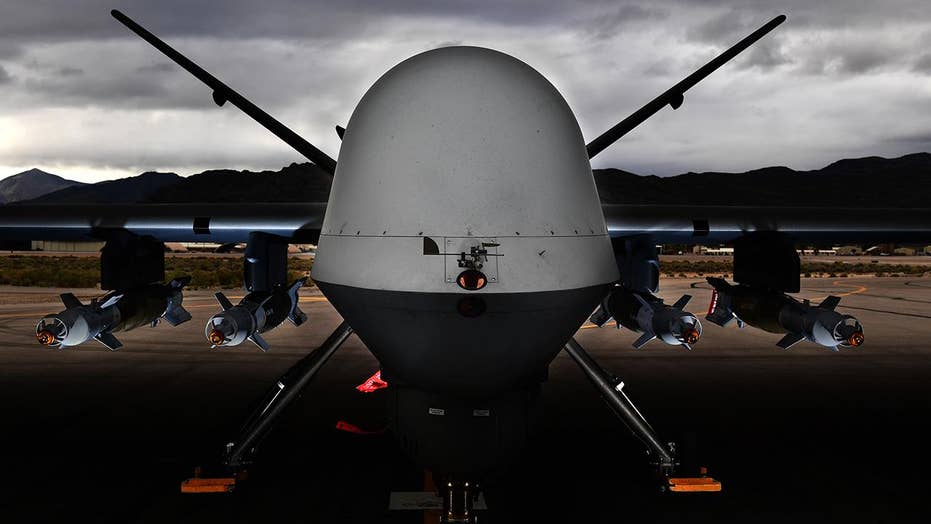 INDIAN SPRINGS, Nev. – Inside the Creech Air Force Base one hour north of Las Vegas, military pilots navigate counter-terrorism missions across the world – from a windowless room in a military installation adjacent to a two-lane highway.

The base serves as the nerve center for the country’s drone program (officials take umbrage at the term drone – these aircrafts are not your tech friend’s hobby toy). Pilots act as combatants in the sky over places like Syria, Iraq, and locations in Africa. But they’re sitting in a cockpit in the middle of the desert.

“We fly with the same laws of armed conflict with our manned brethren. We fly with the same rules of engagement. In many ways, I would say because we’re there and we have that persistent look, we’re there for a long time on top of the targets, we generally have a little bit more situational awareness than a fighter crew or bomber crew that checks into the airspace and there to drop our bombs and get-out-of-here type thing,” said Lt. Col Ronnie, who leads the wing of pilots at Creech and is one himself. Pilots at the base are only allowed to give their first names because of security reasons.

The program is no secret. Depictions of these pilots and their tasks have been portrayed again and again in Hollywood, lending to a not fully formed view of what these pilots endure and the training they undergo.

But specifics of gathered intelligence and ongoing missions, obviously, remain under wraps. Many details of the program are kept secret due to the sensitivity of the operations conducted by the pilots. Fox was not granted access to view a pilot’s cockpit.

Quiet, low lighting, with the constant hum of computers, the room where the cockpits are have no windows to the outside to maintain focus. Intrusion and interference is extremely limited. No one can enter the cockpit without permission.

For the aircraft itself, the long flown MQ-1 Predator was recently retired and pilots now control exclusively the MQ-9 Reaper, which offers more capabilities. That includes visual sensors with a wide range of sight – laser, infrared, and full motion video – to be the “eyes in the sky.” It has a range of 1,150 miles and a ceiling of 50,000 feet in altitude.

An MQ-9 Reaper drone is parked underneath a hangar on the tarmac at Creech Air Force Base. (Fox News)

“Over time, the sortie durations have increased with the reaper. It carries more weapons,” said Col. Julian Cheater, commander of the 432nd Air Expeditionary Wing at Creech. “The rest of the world has taken note and seen we’ve got longer loiter times, persistent attack and reconnaissance options available to us and really that precise ability to target the enemy,” Cheater added.

Due to the opaque nature of the program, misperceptions inevitably rise. Cheater said he has to constantly dispel the notion that these RPA’s are autonomous.

“What we do is completely manned. There’s not an unmanned system at all. It just so happens that, that man or that woman is not co-locating with the aircraft. The cockpit is on the ground somewhere, so it is a very hands-on operation,’ said Cheater.

Pilots are briefed before they sit in the cockpit and remain there for eight-hour shifts, with periodic breaks. But sometimes mission intelligence changes at a moment’s notice. Pilots need to adapt quickly.

The MQ-9 Reaper requires extensive maintenance when not in use. The drones are also shipped from Creech Air Force Base in crates to bases around the world. (Fox News)

“It could be anything from adversary interference to the game plan to things like weather. We may get out there and find that the weather precludes us from being able to do the mission we were planning to do and so we have to adjust,” Ronnie said.

Asked if the pilots ever get nervous or anxious for a mission, Lt. Briana said that she relies on the trust of the aircrew and that there really isn’t time for uncertainty. She added there are days when the hunt can be a waiting game of sorts, as well.

Drone pilots are in constant contact with many different groups, including ground forces. Reports say that an operator’s command takes 1.2 seconds to reach the drone via satellite uplink.

Critics say human error can lead to collateral damage with the death of civilians in hitting a target.

Cheater underscored that these are not indiscriminate carpet bombs being conducted haphazardly, but are pinpoint blasts that can thwart an enemy encroaching on coalition forces, saving countless lives.

In any case, Creech offers counseling and services for those pilots who need to talk through certain moral implications of the job.

But that stigma is dated, according to officials in the program. The strikes that are carried out are so coordinated that, at the end of the day, pilots understand the significance of the work they do and how it preserves national security.

“I’m extremely proud of what I do,” Briana said, “and I try to share that with people when they ask and there’s not an operational security reason not to.”