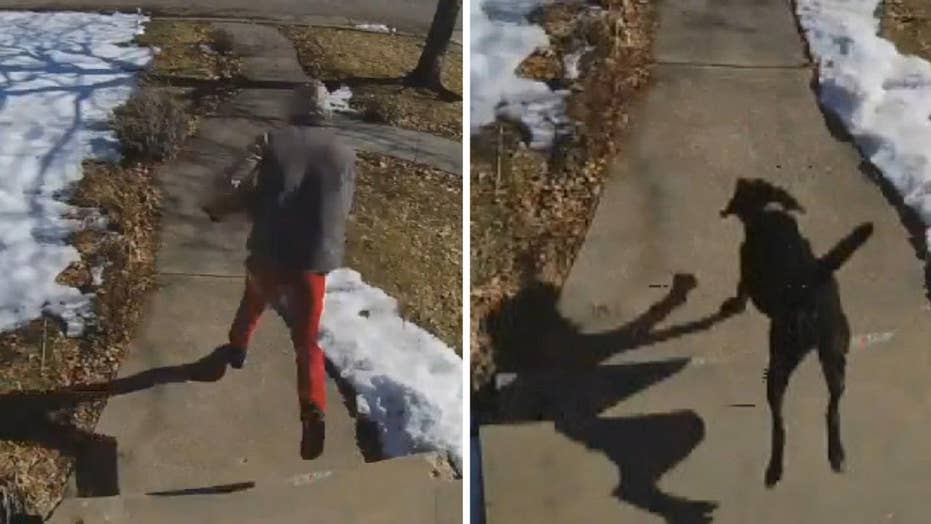 A package thief in Utah is caught on camera being chased away by a black lab.

A Utah family's black lab may not have a mighty bark or even a vicious bite, but the pooch proved over the weekend he had what it took to thwart a porch pirate trying to steal something from his owner's house.

Whitney Cahoon said that package thieves have become a common occurrence in her neighborhood in Ogden, Utah, located north of Salt Lake City, but she never thought she would end up being a victim since she lives on a busy street. One man, however, tried to steal a package -- containing a $4 dimmer switch from Ikea.

In a doorbell camera video, the man can be seen running up to her porch and grabbing the package. That's when Cahoon called on her 9-year-old black lab, Zero.

Zero then can be seen in the video bolting from the home towards the thief. The man had a getaway car waiting for him but tossed the package back out onto the road.

Doorbell camera catches a deer jumping over a family's dog

Raw video: A Kansas homeowner found this cute moment recorded on their doorbell camera, a deer sprints across the street, jumps over the family's black lab and pauses before running out of sight.

“He just went for it, it was awesome!” she said.

UTAH MOTHER BEAT CAT IN FRONT OF HER CHILDREN THEN 'SNAPPED ITS NECK,' COPS SAY

While Zero may be a fan of playing catch, Cahoon said she was surprised by how he tried to go after the thief since he's usually a pretty anxious dog.

“Just a lab that’s scared of everyone and everything,” she told FOX13. “I mean dusters, plastic bags, the cats...he’s terrified of the cats.”

Cahoon just hopes the incident shows that her house is not one to be targeted in the future.

“I’m hoping that they word spread from them not to mess with us,” she said.