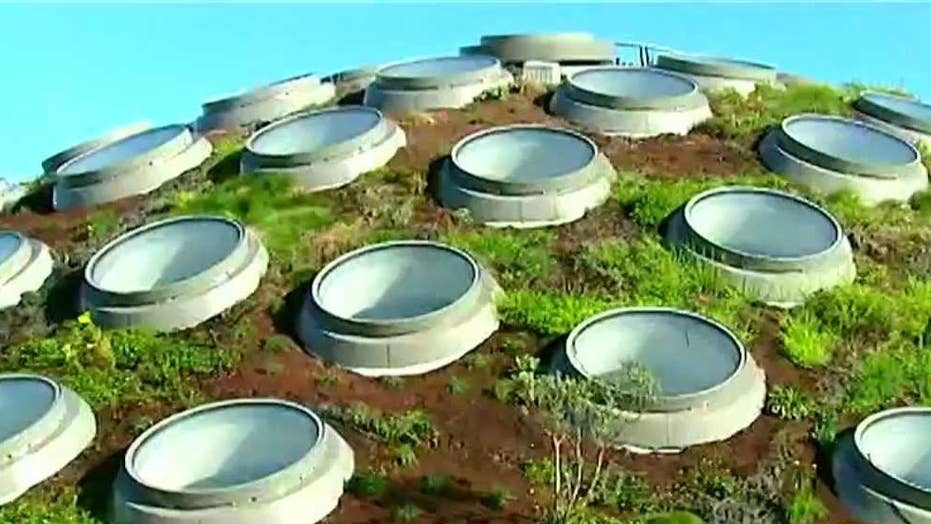 The initiative means new design and engineering challenges because the city has the most stringent and far reaching green infrastructure requirements in the country.

The voters passed it – now the city and county of Denver has to figure out just how to institute it.

A low turnout, off-year election has ushered in one of the most far-reaching and stringent requirements in the country for green roofs, or mandatory roof gardens.

The Green Roof Initiative, or Initiative 300, mandates new and existing buildings, 25,000 square feet or more, include a green roof or a combination of green roof and solar energy.

Brandon Rietheimer, the campaign manager who gathered signatures to get the Denver Green Roof Initiative onto the ballot, says he was inspired by Bernie Sanders's climate message. According to Rietheimer, the initiative is designed to combat the Urban Heat Island effect where rooftops, pavement, parking lots and roads absorb the sun's rays.

"What we're trying to do is really return the city to pre-development conditions by adding green space and that will lower temperatures," he said.

Those who fought it and are now working to clarify it, say not enough input was taken into consideration before it was put before the voters who may not have understood full impacts of the measure.

"It was really drafted more or less in secret,” said Kathie Barstnar, chair of the Colorado Real Estate Alliance. “They didn't reach out to any of the stakeholders who would actually have to implement the ordinance."

For example, she said, local water, power and fire departments were not consulted in advance.

While it officially went into effect Jan. 1, the city is still working through questions and issues brought on by such a wide-sweeping, technical initiative.

The Denver Department of Public Health and Environment (DDPHE) has been holding task force meetings for stakeholders to develop recommended modifications, clarifications, and improvements, "through a collaborative, consensus-based process", according to the city website.

There is also a Technical Advisory Group to advise the community on the implementation of the ordinance. Last week, the Planning Board held a packed hearing for public comments.

Both sides of the issue acknowledge up-front costs of green roofs are expensive. According to estimates from real estate and construction experts, green roofs in Colorado could cost $25 to 35 per square foot (not including plants, water costs or maintenance), compared to $15 a square foot for standard, thermoplastic polyolefin single-ply (TPO) roofing with flashings.

But Rietheimer said there is a return on investment of six years for green roofs and roof longevity is doubled, or even tripled.

The California Academy of Sciences at San Francisco's Golden Gate Park has a living roof. Senior Director of Exhibits and Architecture Scott Moran explains it attracts wildlife and absorbs water “...Preventing stormwater from carrying pollutants into the ecosystems around an area."

But a few states over, in Colorado, the semi-arid environment makes water a precious resource.

"There are significant number of unknowns, even if you just look at the water retention requirements,” Barstnar said. “Colorado has very extensive water rights laws."

There are also mechanical and engineering challenges, plus ongoing maintenance expenses and concerns costs will be passed down to consumers, hurting smaller businesses and renters.

"Whether it's office rents, or apartment rents, the biggest complaint we hear daily in Colorado right now is rents are too high," said developer Jim Neenan, president and CEO of Prime West Development.

Another issue raised is that it impacts all buildings of a certain size, regardless of whether it's a church, historical building, non-profit or affordable housing.

"You can drive around the city or walk around the city, you can see example after example of buildings that there would be no way to put a green roof on,” Neenan said. “Anything with a sloped roof would be very, very difficult to retrofit or implement a strategy like this. It's hard to take one solution and apply it across a broad base."

There will be a way to apply for exemptions, but which buildings will be eligible remains to be seen.

Chris Woldum is a partner at Zeppelin Development which has already been voluntarily including green roofs in their projects. Woldum said green roofs have helped attract tenants.

"Building codes are constantly being updated. Whether it be energy codes, plumbing codes and really they are, intended to provide a net benefit to the community,” he said. “We see the green roof initiative to be beneficial in the same ways as the advancement of building codes."

Rietheimer brushed off criticism, saying critics oppose it because of a lack of awareness.

"I think there's a lack of education,” Riegheimer said. “Once people really see the numbers and they see all the benefits, both environmental and economic that those fears will go away."

He said they hope builders will benefit in the long term and then pass the savings on to their tenants.

Denver Elections sent out more than 400,000 mail ballots in the 2017 election. But only about 34 percent of voters weighed in on the initiative. A little more than 75,000 'yes' votes made required green roofs the new reality.