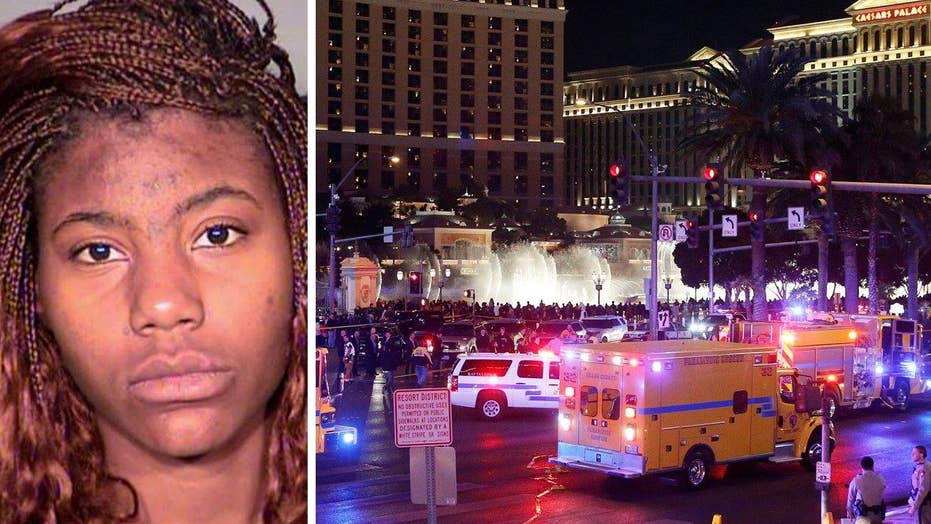 Suspect in deadly Las Vegas crash to be charged with murder

Police believe Lakeisha Holloway intentionally drove her car into a crowd on the Vegas strip, killing one and injuring 37

The homeless woman accused of intentionally driving her car into a crowd of pedestrians along the Las Vegas Strip Sunday night told police she was tired and stressed out, but did not clarify her motive further, according to a police report obtained Monday.

Lakeisha Holloway, 24, told investigators that she had tried to park her car in various garages around the city in an effort to get some sleep, but had been made to leave by security guards.

Holloway, an Oregon resident, had been in Las Vegas for about a week before she drove her 1996 Oldsmobile sedan onto the sidewalk outside the Paris and Planet Hollywod casino-hotels, killing an Arizona woman and injuring 37 others.

The report quoted Holloway as saying the Strip was "a place she did not want to be" Sunday night.

"She would not explain why she drove onto the sidewalk but remembered a body bouncing off her windshield, breaking it," the report added.

Investigators said Holloway had run out of money and she and her daughter had been living in the car. Police believe she was headed to Dallas to find her daughter's father after they had a falling out.

After Sunday's crash, Holloway parked at a casino a few blocks away, told a parking attendant that she had run down people and asked the valet to call 911, Clark County Sheriff Joe Lombardo said. Her daughter, who was in the backseat, was not hurt.

The sheriff said Holloway was stoic when police arrived, showed no resistance and spoke coherently about what happened. He declined to elaborate on what she said.

"She didn't appear to be distressed due to her actions. That's the best way I can describe it," Lombardo said.

There was no evidence that Holloway had consumed alcohol, but a drug recognition expert at the scene determined that she was under the influence of some sort of stimulant, Lombardo said.

People jumped on the car and banged on its windows, but Holloway didn't stop driving on the sidewalk, Lombardo said. The car was fully on the sidewalk twice, including once when it traveled for 200 feet, police said.

Holloway, who was being held without bail, will be charged with murder with a deadly weapon, said Clark County District Attorney Steve Wolfson, who anticipated "a great number" of additional charges.

"When a person drives a 2,000-pound-plus motor vehicle intentionally onto a sidewalk, killing and injuring scores of people, that's murder," Wolfson said.

Holloway was under suicide watch at jail, said Deputy Clark County Public Defender Scott Coffee said. He said it was too early to say if he would pursue an insanity defense.

Authorities declined to comment on a potential motive and said they were struggling to piece together Holloway's background.

She had changed her name to Paris Paradise Morton in October, according to Oregon court records.

Several years ago, Holloway, a graduate of an alternative high school, received an award for overcoming adversity from the nonprofit Portland Opportunities Industrial Center.

In 2012, she told The Skanner, a newspaper that covers Portland's African-American community, that she was homeless during her freshman year in high school. Holloway's cousin, Lashay Hardaway, told The Oregonian that Holloway worked hard to provide for her daughter.

Hardaway told the paper that Holloway rented a room in Las Vegas and "makes good money", though the Oregonian report did not elaborate on what her profession was. Hardaway added that she last saw her cousin at around Thanksgiving, and said she didn't seem stressed.

At least 35 of the injured were taken to hospitals, including three people still in critical condition with head injuries, officials said. Sunrise Hospital & Medical Center, which treated 13, still had five patients Monday, including two who were upgraded to good condition.

The crash killed Jessica Valenzuela, 32, of Buckeye, Arizona, who was visiting Las Vegas with her husband, according to the Clark County coroner.

Other victims were from Oregon, Florida, Colorado, California, Washington, Mexico, and Quebec, Canada. Five were Canadian citizens, and four were Oregon college students in town to compete in a wrestling tournament.

Among the injured were five wrestlers and their coach from Delaware Valley University in Doylestown, Pennsylvania. Another four were wresters from Pacific University in Forest Grove, Oregon.