Lawmakers call for action after an accident killed three siblings.

Safety near school bus stops has garnered national attention after a string of deadly accidents across the nation in recent weeks.

“Rich and I pay close attention to these news stories so we can learn from them and hopefully look for ways to keep our kids safer,” she said. “We have noticed that since this story went national, the drivers along each of our routes have been exceptionally courteous, for now.”

“Unfortunately, it usually takes a tragedy to get people's attention and participation.”

The accidents are a “huge concern” for parents and law enforcement, Orlando, Fla.’s WESH-TV reported.

A driver is required by law In Florida to stop for a school bus when its stop arm is out or red lights are flashing, the report said.

"Anytime you see a bus with its red lights flashing there's going to be children getting on or off that bus in close proximity. You have to stop. You have to pay attention. These are children's lives," Dana Nelson, director of transportation at Baldwinsville Central Schools, told New York’s CNYCentral.com.

"It's just a matter of time before something happens here locally and what we do at Baldwinsville is try to make sure it's not gonna be us," Nelson said.

On Thursday morning, an unidentified 7-year-old boy was found dead at a bus stop in Pennsylvania after a vehicle hit him, state police said.

The suspected driver, who was not immediately identified, likely didn’t realize that someone had been struck, State Police Trooper David McGarvey said in a statement. Investigators determined that the vehicle was likely traveling a a slow speed. 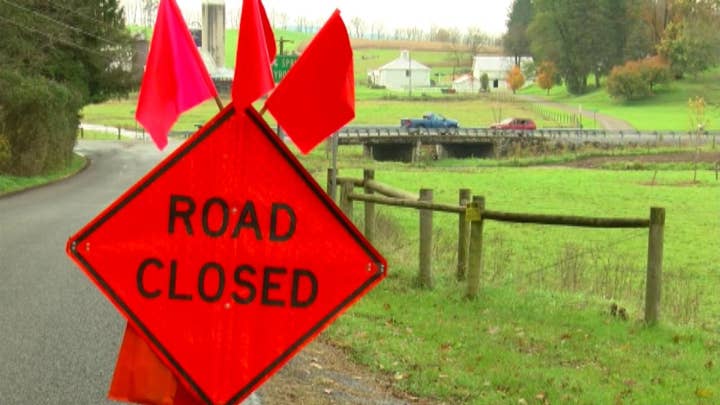 A Tyrone school bus driver spotted the deceased child at the area near his home, state police tweeted.

Also on Thursday, seven people -- five children and two adults -- were waiting at a school bus stop when a vehicle speeding along a residential road hit them, police said.

Five people were transported to a local hospital and one child was in critical condition, according to Fox 13 Tampa Bay. The kids’ ages range from 6 to 12 years old.

In Mississippi, a 9-year-old boy identified as Dalen Thomas was killed Wednesday morning when he was crossing a street to board a school bus.

Hunter Newman, 22, allegedly hit a 9-year-old boy who was crossing a street to board a school bus. (Lee County Sheriff's Department)

In Indiana, three children -- identified as twin brothers Xzavier and Mason Ingle, 6, and Alivia Stahl, 9, their sister -- were killed in a crash Monday when the driver of a pickup truck hit four students boarding a school bus, state police said.

“I started to cry instantly,” Christena Chance, who drives a school bus for Merrillville Community School Corp., told the Tribune.

Alyssa Shepherd, 24, faces three counts of reckless homicide and a misdemeanor traffic violation for her alleged involvement in the deadly crash, authorities said.

The child who survived the deadly crash, 11-year-old Maverik Lowe, remained hospitalized in stable condition Wednesday, according to his parents. The boy suffered multiple broken bones and internal injuries and had undergone two surgeries as of Wednesday morning, police said.

“He will require multiple surgeries and may never walk again,” a GoFundMe page for Maverik said. “He suffered broken ribs, busted kneecap, fractures in his arm and wrist. His leg is in pins and rods holding it together. He had plastic surgery already to put his face back together. He has slipped disks in his spine by his neck. He is a very, very strong kid.”

“He will require multiple surgeries and may never walk again.”

“My first reaction to the awful news was both extreme sadness as well as a feeling of uneasiness,” Perez told the paper.

One person died, and 11 others were injured Tuesday night when a truck collided with a school bus full of kids on an interstate in Alabama. (Alabama Law Enforcement Agency)

Also on Wednesday, two brothers, ages 11 and 13, were struck in a hit-and-run accident near a bus stop in Louisville, WHAS-TV reported.

Other tragedies, of course, happen when students are inside school buses.

On Oct. 24, for example, a school bus carrying middle and high school students collided with a truck on an interstate in Alabama, killing one and injuring 11 others. Amanda Nicole Hubbard, 31, the driver of the truck, died in the crash, according to AL.com.

Eight students and three adults were injured and transported to a nearby hospital. The driver of the bus suffered “serious” injuries, but was expected to survive, the paper reported.

“But sadly," Perez said, "we expect to see things going back to normal once the sting of this new story gets tucked behind the constant newsfeed of the day."