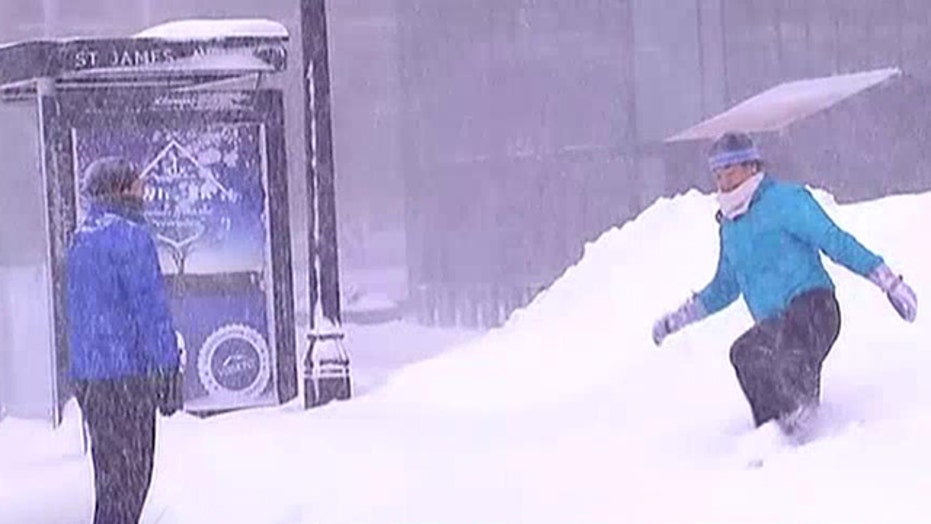 Northeast continued to be hit with extreme cold and snow

The fourth winter onslaught in less than a month brought a new round of wind-whipped snow to New England on Sunday, threatening white-out conditions in coastal areas and forcing the cancellations of hundreds of flights.

A blizzard warning was in effect for coastal communities from Rhode Island to Maine into Monday; and a bone-chilling blast of cold, with lows of minus-10 degrees was in the Sunday night forecast in parts of the region.

Forecasters warned of exceptionally cold air, perhaps the coldest in years. Strong winds that were expected to continue into Monday reduced visibility, created drifts and complicated an ongoing cleanup effort.

With more than 6 feet of snow already standing in some areas from previous storms, crews struggled to keep snow-clogged roads clear as fresh snow blew in as soon as they passed.

Strong winds expected to continue into Monday reduced visibility, created drifts and complicated an ongoing cleanup effort. Forecasters were talking about another storm on the horizon for midweek.

"It's historic. It's biblical," attorney Frank Libby said he walked down a deserted street in Boston's Back Bay neighborhood. "I think we're in uncharted territory. People just don't know how to deal with the logistics of it."

He had one message for Mother Nature: "Give us a break."

Some areas of New England reported nearly 2 feet of snow from the storm including Acushnet, Massachusetts with 22 inches, and Salisbury with 20.5 inches. Boston recorded 13 inches of new snow. At the easternmost tip of Maine, Lubechad had 2 full feet.

In Massachusetts’ southeast coast, the city of New Bedford had recorded 19 inches of snow by Sunday morning, MyFoxBoston.com reports.

A bone-chilling blast of cold, with lows of minus-10 degrees also was in the Sunday night forecast in parts of the region. The temperatures are expected to be the coldest of the season, according to the National Weather Service.

"We're dropping below zero and wind chills will be dropping to 20 below and maybe minus-25 by morning," said National Weather Service meteorologist Bill Simpson. "People should take it seriously. It is the coldest in Massachusetts in many years."

In Vermont, the wind was enough to force shut-down of the Lake Champlain ferry cross between Charlotte and Essex, New York.

On Cape Ann north of Boston, Patrick McGehee said he was awed by lightning strikes early Sunday morning when he took out his dog.

"I wasn't sure what was going on, if it was some kind of spiritual event or what," said McGehee, the owner of the Mary's by the Sea summer rental business in Rockport. "The whole sky lit up like somebody lit up a lightbulb."

Transportation officials in the region had taken precautions. By Sunday afternoon, around 75 percent of flights originating from Boston’s Logan International airport had been cancelled, and more than 1,900 flights were cancelled around the United States, according to the flight tracking website FlightAware.

The Massachusetts Bay Transportation Authority also canceled all rail, bus and ferry service in the Boston area on Sunday.

Gov. Charlie Baker in Massachusetts and Gov. Gina Raimondo in Rhode Island warned motorists to stay off the roads.

Baker said Sunday morning that high tide was not as severe as anticipated, with no reports of major flooding, but warned that winds gusting over 60 mph could bring power outages.

"There's a little bit of deja vu all over again in this," he said.

Ahead of the storm, forces gathered to remove piles of snow and ready for the next round.

Massachusetts called up hundreds of National Guard troops to assist with snow removal, and the Hanscom Air Force base outside Boston became a staging area for heavy equipment pouring in from eight other Northeast states to help in the effort.

The bad weather spanned several states — winter storm warnings extended west into Michigan and Ohio, where whiteout conditions led to a pileup on the Ohio Turnpike that killed at least two people. Another storm-related crash on the New York Thruway south of Buffalo killed one person.

New Englanders also won't be the only ones with the winter blues, forecasters say. A snow storm could bring 6 to 9 inches of snow to parts of Arkansas, Missouri and Tennessee. Freezing rain was forecast for northern Mississippi and 2 to 4 inches of snow and sleet will be possible in north Georgia.

The storm also threatened Atlanta, where just over a year ago an ice storm trapped commuters for hours on the region's freeways.