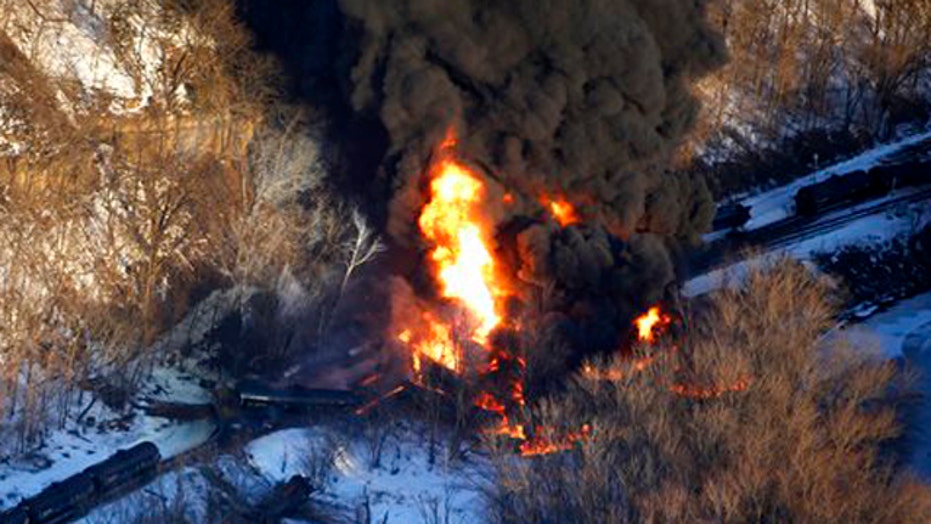 A freight train carrying crude oil through Illinois derailed, bursting into flames and promoting evacuations of everyone within one mile of the accident, authorities said.

The train derailed at 1:20 p.m. near where the Galena River meets the Mississippi, Jo Daviess County Sheriff’s Sgt. Mike Moser said. The train had 103 cards loaded with crude oiler, along with two buffer cars loaded with sand.

There were no injuries reported and the cause of the crash has not been determined.

The derailment occurred three miles south of the Galena in a rural area, which is a major tourist attraction and the home of former President Ulysses S. Grant.

Firefighters arrived on the scene, but could only fight the flames from the bike path, Galena Assistant Fire Chief Bob Conley said. They attempted to fight a small fire, but were unable to stop the flames.

The derailment comes amid increased public concern about the safety of shipping crude by train. According to the Association of American Railroads, oil shipments by rail jumped from 9,500 carloads in 2008 to 500,000 in 2014, driven by a boom in the Bakken oil patch of North Dakota and Montana, where pipeline limitations force 70 percent of the crude to move by rail.

Since 2008, derailments of oil trains in the U.S. and Canada have seen 70,000-gallon tank cars break open and ignite on multiple occasions, resulting in huge fires. A train carrying Bakken crude crashed in a Quebec town in 2013, killing 47 people. Last month, a train carrying 3 million gallons of North Dakota crude derailed in a West Virginia snowstorm, shooting fireballs into the sky, leaking oil into a river tributary and forcing hundreds of families to evacuate.

The ruptures and fires have prompted the Obama administration to consider requiring upgrades such as thicker tanks, shields to prevent tankers from crumpling, rollover protections and electronic brakes that could make cars stop simultaneously, rather than slam into each other.

The Federal Railroad Administration said in a statement it was sending investigators to the crash site.