Security footage shows the moment a Connecticut 6-year-old caught on fire after playing with a ball doused in gasoline.

In April, a 6-year-old Connecticut boy suffered third-degree burns after playing with a ball doused in gasoline and set on fire — apparently an idea popularized by TikTok, a social media app.

Laura Giacobbe told Fox News Digital that she asked Maria Rua, Domnick's mother, to watch over their children at Giacobbe's Bridgeport home for a couple hours while she ran errands on April 24 — the day Dominick caught fire.

CONNECTICUT BOY BURNED AFTER BEING HIT WITH TENNIS BALL DOUSED IN GASOLINE, LIT ON FIRE: FAMILY

Dominick Krankall, 6, was found with severe injuries by Bridgeport police and was taken to a local hospital in April. Reports stated that the 6-year-old had a swollen face and has a long recovery, but might eventually have minimal scarring as a result of the incident. (GoFundMe made by Krankall's family)

Giacobbe's sons and Dominick were apparently playing outside under Rua's watch when they lit the ball on fire — an idea they got from TikTok, Giacobbe explained.

"The TikTok trend shows a soccer ball on fire being kicked around," she said.

Security footage from her backyard shows the boys kicking the flaming ball around. 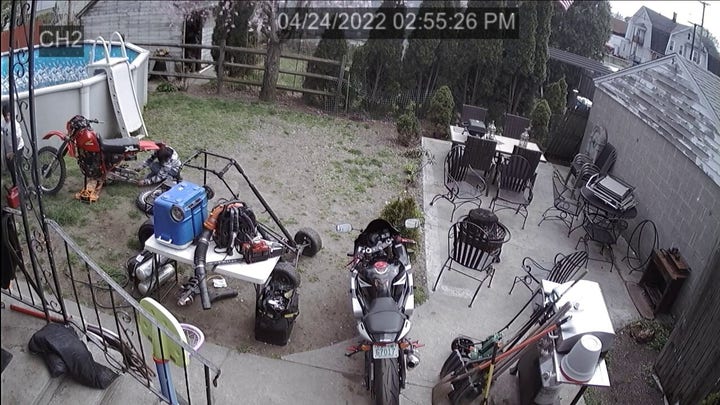 The kids eventually go back inside, and less than an hour later, they return to the backyard and continue to kick around an ignited ball, at which point Dominick catches fire. Giacobbe's 11-year-old son can be seen trying to quash the flames on Dominick's face.

Dominick sustained severe third-degree burns and was transported to a nearby hospital, where he was treated and eventually released.

Dominick's family, however, says the 6-year-old was intentionally set on fire.

An online fundraiser for the boy titled "Justice for Dominick… STOP BULLYING!" hoping to raise $50,000 for medical bills, has reached nearly $600,000 in donations.

"I want her arrested," Giacobbe said of Rua, who did not immediately respond to an inquiry from Fox News Digital.

A June 11 update on the Krankall family's GoFundMe states that the backyard security footage does not show "how it happens."

"You just see Dominick on fire," the updates states. "… Now, we have people coming at us, calling my family liars and scammers. We are more than happy to give refunds to anyone who believes this. I understand if you do. I already spoke with the GoFundMe team about this. If your child, told you this story moments after it happened, you wouldn’t believe him/her? Even a month and a half later the story has never changed! Not a single detail!"

The family added that they have "proof" of Stephano bullying Dominick, adding that the donated funds "WILL BE GOING TO A NEW HOME" rather than for personal use, and that "[e]verything else will be put into a trust for Dominick that is irrevocable."

Before the traumatic incident that has torn the two families apart, Giacobbe said she and Rua, neighbors with a bunch of kids around the same ages, were "soul sisters."

"[A]ll our kids are around the same age, if not the same age. And it was pretty cool because, you know, when you interacted, you had a family that had a lot of kids. And … you never find that many people that you want to hang out with," the mother said.

Giacobbe reiterated that she's not out to "get anybody" or "put [Rua] down."

"I just want the truth out. And I don't like what's going on," she said.

The Bridgeport Police Department has said there were no signs of deliberate injury in the case. Police are actively investigating the incident.