Logan MacNamara recounts fending off a raccoon that attacked her daughter, Rylee. MacNamara says the damage was 'not that bad' but they're both receiving the rabies vaccine series.

A Connecticut mother followed her instincts and saved her 7-year-old daughter from a ferocious rabid raccoon that attacked her on the family's front porch.

Shocking security footage captured the savage creature ambush the young girl, Rylee MacNamara, as she left her Canterbury, Connecticut, home to head to school at 7:45 a.m. on Friday, Dec. 2. 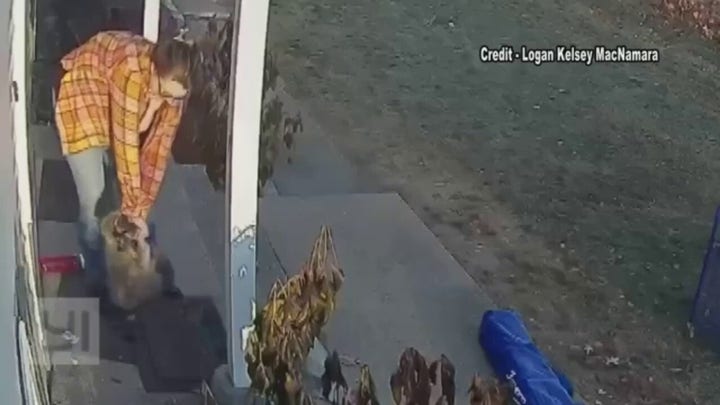 The vicious raccoon sunk its claws into Rylee's left foot as she struggled to free herself from the feral animal, swinging her leg back and forth in a desperate attempt to shake it loose.

Despite her attempts, the raccoon held on for dear life until the mother, hearing her daughters panic-stricken cries, ran to her aid.

In the home security footage, mom, Kelsey MacNamara, is seen grabbing the raccoon by the scruff and hurling it back into the yard.

A young girl was on her porch in the early morning heading to school when a raccoon made a run for her leg, and latched on, while the girl screamed for dear life. (Fox 61)

MacNamara posted the dramatic video on her Facebook page, writing, "Per Rylee’s request, ‘show everyone what the raccoon did’ we are headed to get checked out for rabies following this unprovoked raccoon attack. I can’t tell you how proud I am of this brave girl!"