Aaron Brink, the father of Colorado shooting suspect Anderson Aldrich, said that he "praised" his son for "violent behavior" as a child and believed him to have committed suicide in 2016. (Associated Press/KFMB)

The father of Colorado Springs mass shooting suspect Anderson Lee Aldrich thought that his son was dead until just six months ago, he told media in a confusing interview.

Aaron Brink, the 48-year-old father of the suspect in the Club Q shooting, told media in a somewhat incoherent interview that he "praised" his son for "violent behavior" as a child and believed him to have committed suicide in 2016.

"I thought he was dead. I mourned his loss. I had gone through a meltdown and thought I had lost my son," Brink said to local outlet CBS 8.

Aaron Brink, the father of Colorado shooting suspect Anderson Aldrich, said that he "praised" his son for "violent behavior" as a child and believed him to have committed suicide in 2016. (Associated Press/KFMB)

Investigators work outside of Club Q on Nov. 22, 2022 in Colorado Springs, Colorado. On Saturday, Nov. 19, a gunman opened fire in the LGBTQ+ nightclub, killing 5 and injuring 25 others, before being subdued by patrons. (Chet Strange/Getty Images)

Brink is a former MMA fighter and adult film star. He has struggled with a severe addiction to crystal meth in the past. He believed his son was dead for six years until receiving an irate phone call from him six months ago.

"I praised him for violent behavior really early. I told him it works. It is instant, and you'll get immediate results," Brink said.

Brink told the outlet his family is "Mormon" and "conservative Republican." He said that the first fear he had after finding out the news was that his son is gay.

Public defenders representing Aldrich, who is accused of killing five people and injuring 17 more in the gay nightclub shooting, describe the 22-year-old in court documents as "nonbinary."

Brink expressed remorse for what his son is accused of doing, "There's no excuse for going and killing people. If you're killing people, there's something wrong. It's not the answer."

"I’m sorry for your loss," Brink said of the victims' families. "Life is so fragile and it's valuable. Those people's lives were valuable. You know, they’re valuable. They’re good people, probably. It's not something you kill somebody over. I'm sorry I let my son down." 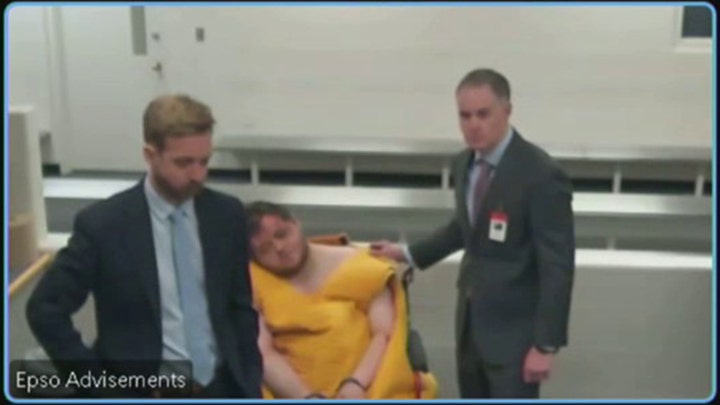 A woman and her daughter pay their respects at a makeshift memorial near Club Q on Nov. 20, 2022, in Colorado Springs, Colorado. (Helen H. Richardson/MediaNews Group/The Denver Post via Getty Images)