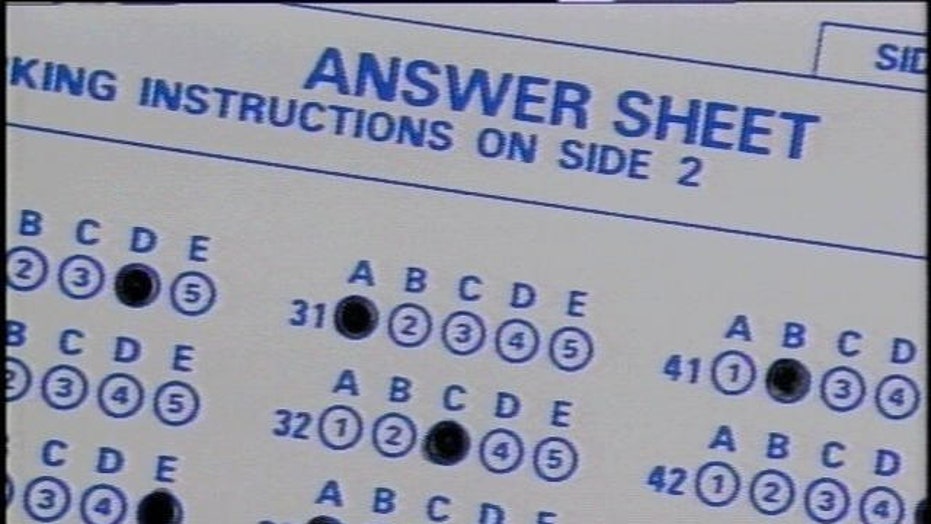 College Board accused of rigging curriculum to push agenda

Is College Board pushing liberal agenda?

The red, white and blue is going back into the U.S. history being taught to college-bound high schoolers, after critics blasted the curriculum-setting test as biased against America.

The College Board, which writes the test that much of the nation's advanced placement course lessons are based on, last week issued a new course and exam description that has more focus on the positive role of the framers, America's effort to rid the world of the Nazi threat during World War II and how entrepreneurs transformed the world's most dynamic economy. Those points of emphasis are expected next year to replace the previous test questions, which some historians and teachers say took a negative view of the U.S.

“The result is a clearer and more balanced approach to the teaching of American history,” the College Board announced Thursday.

“World War II is no longer reduced to the ‘internment of Japanese Americans, challenges to civil liberties, debates over race and segregation, and the decision to drop to atomic bomb.'"

While the College Board can’t directly dictate what is taught in high school Advanced Placement classes, by writing the test that half a million college-bound students take each year it strongly influences the curriculum crafted by teachers. The previous version created an uproar because it focused on racial and cultural divisions in America instead of a collective American identity, and left out unifying figures such as Benjamin Franklin and Martin Luther King. The new version mentions those men and also includes sections on a unified American identity -- plus more focus on America’s founders and founding documents.

The sections on America’s divisions and problems remain, but now exist alongside positive points about America.

One historian who led the charge for the revision said the new version is much better, but not perfect.

George Washington and his fellow founding fathers get more respect in the newly revised College Board advanced placement US history test.

“The College Board scrubbed from last year’s document the more obnoxious expressions of bias against America, against capitalism, and against whites,” Peter Wood, president of the National Association of Scholars, told FoxNews.com.

The old guidelines also previously criticized free markets, noting that they “helped to widen a gap between rich and poor” without mentioning that they had created prosperity. The new version is less one-sided, noting that “entrepreneurs helped to create a market revolution in production and commerce…” and that “workers’ real wages increased… while the gap between rich and poor grew.”

Questions from the old AP US History exam were deemed anti-American by some.

“World War II is no longer reduced to the ‘internment of Japanese Americans, challenges to civil liberties, debates over race and segregation, and the decision to drop the atomic bomb.’ The new version allows that we actually fought and won a war that was ‘viewed as’ a ‘fight for the survival of freedom and democracy against fascist and militarist ideologies,’” he said, adding that it could still be better.

“That’s good, although that ‘viewed as’ expresses skepticism over whether the view was accurate,” he said.

Other parts should also give teachers more guidance, he argues.

“They don’t grasp that America is based on a declaration of principles and that our whole history consists of people striving to bring those principles to life,” he added.

Others say that the College Board likely changed its guidelines due to fear that if it didn’t, a competitor would spring up and be adopted in many school districts and states – and that a continued threat of competition is needed to keep things balanced.

“It was only the prospect of competition that turned the College Board around and made them remove their most biased language. Without real competition, the left-leaning professors who work with the College Board will keep pulling the curriculum their way,” Stanley Kurtz, a senior fellow at the Ethics and Public Policy Center, told FoxNews.com.

The author, Maxim Lott, can be reached at www.maximlott.com or at maxim.lott@foxnews.com